Honestly, I was surprised myself when going through my books, on the search of 'odd' shaped stamps.
As 'round' is the most common and most natural shape, i start this series of articles with 'round' stamps.

Humans love round things.
The most important achievement of human kind, was the invention of the wheel.
No means of transport would have been possible without wheels, watches wouldn't be the same, diner would have been served in square plates, trees would have had edges ... (although i' m not sure about that)....

People love babies, because the are 'rounder' than grown-ups. Combic books figures often have round eyes, because that makes them more cute. Even Mickey Mouse thanks his success to the many round shapes in his body.

Round is perfect, round is easy (coins for example), round is safe (kitchen tables), round is multifunctional (sports), round is closer to nature (planets).

But... round stamps are a disaster :-)
They are very difficult to take out of a sheet, without being damaged.
They don't fit in preprinted albums, they are never in an upright position when placed in an album. And is some cases, you don't even know what side is to be up on top.

Nevertheless, I love round stamps.
And this love i'm sharing here with you.

In this first part of this topic, i 'll show some very fine examples of round stamps.
For that, I take you to Thailand, still one of my favourite countries to collect. 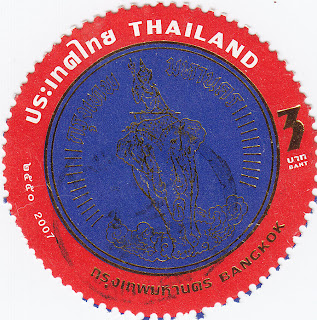 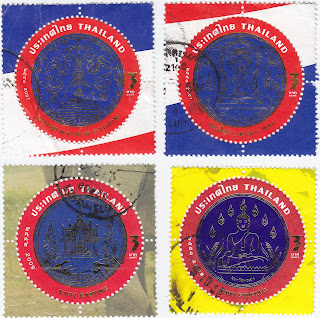 One set was printed with the Thai flag as background.
All individual stamps look similar, the border is red, the background of the design is blue, and the picture of the province is in gold print.

Very common for round stamps, is the square shaped perforation beyond the round perforation.
At least it makes it easier to take a single stamp out of the sheet.
Mostly you'll find the square 'stamp' on letters. It takes a little bit of extra effort to take the real stamp out of it protective square shield.

However, I was able to find a combination on a letter.
The outer board of the stamps was nicely round, but the connecting part between the upper and bottom row of stamps, was still square. (If not, the 10 stamps would have been separated from eachother.

The part that was omitted, is the red part (I don't know if that was for political reasons or not), but the complete sheet has a red border (Thai flag : red, white, blue, white, red).

Finally another Thai stamp, round as well, but not connected to this series above.
It's a joint issue with P.R. China, to celebrate 30 years of relationship between the two (not neighbouring) countries.  On the beautiful stamp, a panda bear is depicted. 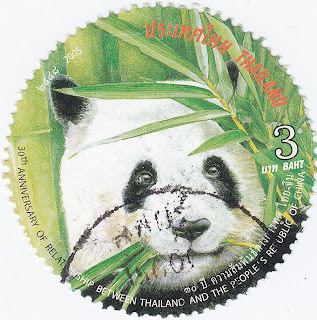 To be continued...
Posted by rainbowstampsandcoins.blogspot.com at 11:51 AM

Hello, with this post you should join Viridian´s Sunday Stamps here: http://viridianpostcard.blogspot.com/
I am sure it will be really appreciated. I like it.

Hi, thanks for the comment, I have added the blog to my list of favourites.
Very nice blog too!