For the last post on this item, I will show the highest denomination, the banknote of 1000 ngultrum.

I start with the back side of the note:
Similar to the 100 ngultrum note, the picture on the back side of the 1000 ngultrum note, is the dzong of Tashichho.
The picture is similar to, but not exactly the same as the 100-note.
Besides the amazing yellow-orange colour of the banknote, we also see a golden seal in the upper left corner.
By flipping the banknote, the colour shifts from reddish to greenish gold.

At the front we see another seal. This is in gold print and has not colour shift.
The seal of Bhutan is composed of a double diamond-thunderbolt (dorje) placed above a lotus, surmounted by a jewel and framed by two dragons.
The thunderbolt represents the harmony between secular and religious power.
The lotus symbolizes purity; the jewel expresses sovereign power; and the two dragons, male and female, stand for the name of the country which they proclaim with their great voice, the thunder.

On the front side of the note, we see a computer made picture of the king, Jigme Khesar Namgyel Wangchuck.

Interesting is the crown he is wearing.
It is the so called "Raven Crown".
In the previous article (about the 500 ngultrum note) you can see a picture of the first king of Bhutan, wearing a similar type of crown.


The Raven Crown today is the official crown worn by the Kings of Bhutan. The Raven is the national bird of Bhutan. The raven is known locally as Jaroq. At one time it was a capital crime to kill a raven in Bhutan.

The hereditary monarchy of the Wangchuk dynasty in the independent Himalayan State of Bhutan was established in 1907. The first king of the Wangchuk dynasty, Sir Ugyen Wangchuck (1862–1926), was a charismatic figure who came to power against a turbulent background of incessant and complex feuding in that chaotic warrior state. He adopted as the unique symbol of his authority a crown surmounted by the head of a raven.
The bird represents a form of "Mahakala", Bhutan's guardian deity. The prototype of the founding monarch's Raven Crown had first been devised as a battle helmet for his father, Jigme Namgyel (1825–81). Known as the Black Regent, he had worn it in bloody struggles against his many rivals within the country and against the British who tried, unsuccessfully, to subdue him.

Posted by rainbowstampsandcoins.blogspot.com at 12:30 PM No comments:

In this third article on banknotes of Bhutan, I present the 100 and 500 ngultrum notes.

On the front side of the 100 ngultrum note, we see again the portrait of the former King Jigme Singye Wangchuck (same image as on the 10 ngultrum note).

The back side of the note, shows an amazing Dzong, the buddhist temple Tashichho Dzong, in the city of Thimphu.
Thimphu is the capital city of Bhutan, situated in the western part of the country.
With more or less  80,000 habitants, it is also the largest city in Bhutan.
Tashichho Dzong stands on the left side of the Thimphu/Wang chhu river.
In 1641 Zhabdrung built the Tashicho Dzong (Fortress of the auspicious religion) in place of the Dho Ngon (Blue stone) Dzong built by Lama Gyalwa Lhanangpa.
In 1698, the dzong caught fire and was restored.  The dzong caught fire for a second time during the reign of the 16th Desi and 13th Je Khenpo. In 1869, the dzong once again caught fire. His Majesty the Second King initiated the renovation of the Dzong in 1962. Today, Trashichho dzong houses the secretariat, throne room, and offices of the King of Bhutan. The northern section is the Je Khenpo and Central Monk Body’s residence.

The back side of the note shows the Punkha dzong - the palace of great happiness.
Constructed by Zhabdrung (Shabdrung) Ngawang Namgyal in 1637–38, it is the second oldest and second largest dzong in Bhutan and one of its most majestic structures. The Dzong houses the sacred relics of the southern Drukpa Kagyu school including the Rangjung Kasarpani, and the sacred remains of Zhabdrung Ngawang Namgyal and Terton Padma Lingpa. Punakha Dzong was the administrative centre and the seat of the Government of Bhutan until 1955, when the capital was moved to Thimphu.


This dzong is located at the confluence of the Pho Chhu (father) and Mo Chhu (mother) rivers in the Punakha–Wangdue valley. Because of the soft climate, Punakha is also called the summer capital of Bhutan.

Posted by rainbowstampsandcoins.blogspot.com at 2:27 PM No comments:

After showing the first 3 notes from the current set of Bhutan banknotes,
I continue with the banknotes of 20 and 50 ngultrum.

In the middle of the banknote, we find another buddhist symbol : the wheel of Dharma.
After the white conch (on previous notes) we see another of the 8 auspicious symbols:
The golden wheel symbolises the auspiciousness of the turning of the precious wheel of Buddha's doctrine, both in its teachings and realizations, in all realms and at all times, enabling beings to experience the joy of wholesome deeds and liberation. 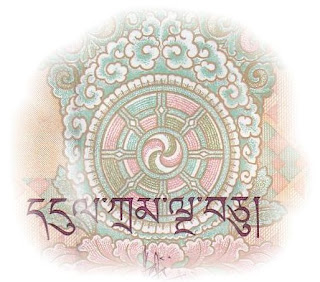 The Trongsa dzong, is the largest dzong in Bhutan.
In Bhutanese (or Dzongkha) 'trongsa' means : the new village.

... to be continued ...
Posted by rainbowstampsandcoins.blogspot.com at 10:30 PM No comments:

Today I'm presenting a realy beautiful set of banknotes.
Bhutan is a country in cental Asia, stuck between China in the north, and India to all other sides.
Bhutan doesn't really has diplomatic relations with the Peoples Republic of China, and is more India-orientated.
The country is a bit smaller than The Netherlands, but its population is estimated less then one million people.
Bhutan is hard to visit, as all tourist have to book their holidays through local travel agencies, which cost up to 250 USD / day.
It's a way to avoid mass tourism.
The Bhutan currency 'ngultrum' is exchangable with the Indian rupee 1:1.
"dNgul Tam"  means 'silvercoin' and is divided into 100 "ch(h)etrum(s)"
The banknotes start with  ngultrum ...

The 1 ngultrum note, shows dragons, and the 5 ngultrum mythical birds.
On the back side of the 1 ngultrum, we see the Simtokha Dzong, and on the back side of the 5 ngultrum, a picture of a house. I couldn't find out if 'Taktsang' (written underneath the picture) refers to a city in Tibet or not.
The Simtokha Dzong is a 'Dzong' - a palace, house of local governors, bhuddist school, place where monks live and pray ...
The 10 ngulturm note, shows us a portrait of the former King of Bhutan, HRH King Jigme Singye Wangchuck (reign : July 1972 - December 2006)

We also see on the front side of the banknote, a conch (shell), one of the 8 symbols of good luck.
This conch can also be found on numerous stamps of the Indian Feudatory States of Cochin,
Travancore and Travancore-Cochin.

The white conch which coils to the right symbolises the deep, far-reaching and melodious sound of the Dharma teachings, which being appropriate to different natures, predispositions and aspirations of disciples, awakens them from the deep slumber of ignorance and urges them to accomplish their own and others' welfare.


On the back, a picture of another dzong (palace), this time in Paro.

Posted by rainbowstampsandcoins.blogspot.com at 10:55 PM No comments:

Languages have always been my passion, and much starts with alphabets of course.
Since September is the perfect month to start school, I start my new topic on themed stamps now.
Alphabets and all that is related to that topic.

For the first item, I take you to Hong Kong, China.

In 2006 a sheet with 30 stamps was issued.
26 letters of the Latin alphabet, and 4 repeated letters A, E, I and O.
All stamp show one letter, and they can be combined to a word.

Each stamp shows a partly printed letter and partly a tool in the shape of the non-shown part of the letter. There's no actual relation between the tool and the shown letter (except for the shape).

The same sheet was also printed on auto-adhesive paper.
The stamps are identical to the gummed ones, except for the perforation.


... this is just the beginning ...
Posted by rainbowstampsandcoins.blogspot.com at 2:07 PM No comments: