In my previous post I explained about the printing codes on the Euro banknotes.
I only showed the lower denominations.
Of course, also the higher notes have those codes.
The problem is, I don't have those notes in high amounts :-)

For collectors who are in search of one note of each country ... good luck.
And of course as with the smaller notes, each printing code should correspond with the letter proceeding the serial number.
Posted by rainbowstampsandcoins.blogspot.com at 1:46 PM No comments:

In the last few years, the number of 'odd stamps and odd sheets' is increasing.
Whoever starts collecting nowadays, might think that 'oddness' is the general rule.
Each country must have it's odd stamp or sheet at least once a year.

Well recently I was sent a beautiful sheet from Indonesia, and this from my Filippina friend.
Of course I can't resist in posting it here in my blog for you.

On the sheet, we find 2 stamps.
The first one shows the "Leptophryne cruentata" better known as the 'bleeding toad' or the 'fire toad'. It's an critically endangered toad that can be found on the Malay peninsula and suthern Thailand.
Due to the eruption of the Mount Galunggung in West-Java (Indonesia) in 1982, this toad is critically endangered.

The second stamp, shows the "Nymphoides indica", also known as the White Water Fringe or the Water Snowflake.
This waterplant thanks its name to its resemblance to the water lily (Nimphaea) and is therefore called "Nymphoides". 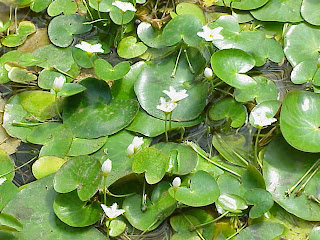 The sheet was only issued 40,000 times, and bares a number on the sheet.

Although this sheet is rare, please bare in mind that that the animal depicted is in higher need of conservation then any of the above stamps.
Hopefully issues like this will draw the attention on the need of wildlife conservation.
Posted by rainbowstampsandcoins.blogspot.com at 6:28 PM No comments:

I don't know if the sun has something to do with it, but I'm in a 'round' mood today.
It's not really about the sun that I'm going to write, but at least we're up in space.

The first man in space was the Russian cosmonaut Yuri Gagarin.
In English we would call him an astronaut, and the Chinese would even say a taikonaut.
Whatever you call him, he was the first man ever leaving the earth' athmopshere and entering space.

In fact, it wasn't ment to be at first. However his colleague's name : German Titov wasn't sounding "russian" enough and that gave him the chance to meet history in April 1961.
Although he was the first human in space, some living animals get the credit of being in space before him.

Yury Gagarin used to joke: "I could never understand if I was the first human or the last dog in space". The dogs Dezik and Gypsy were the first to travel to space on a rocket launched successfully in 1951. "The most lonely and unhappy dog" was Layka ("Barker" in Russian, a term used for several breeds of dogs) who went to space in 1957 on Vostok, which at that time didn't have the slowdown and heat protection systems. Layka had a one way ticket. She was a stray dog captured on the streets of Moscow, trained, and sent up into space. She died only a few hours in, due to overheating and panicking.

The first living thing to complete an orbit and return alive were two dogs named Belka and Strelka ("Squirrel" and "Little Arrow" in Russian).

They were launched by the USSR in 1960 and spent a day in orbit before their capsule was returned to Earth with the dogs still alive. They landed safely on a designated territory on August 19, 1960.

The dogs on the orbit were followed by apes, cats, tortoises, mice, birds, fish... A whole zoo travelled to space over the past 50 years.


But now back to my intended topic ...
Yuri Gagarin was honoured 50 years after his flight, with a round stamp issued by Sri Lankan post.
In the same year of his flight, (1961) he also visited Sri Lanka, so the stamp is a double celebration.
For the stamp, a round shape was selected (lucky me) and the sheetlet has 12 round stamps and 3 round labels with pictures of Yuri Gagarin. 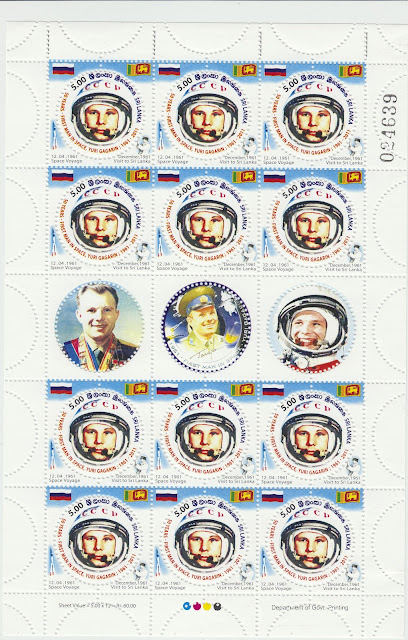 We see Gagarin depiced the way he was dressed as an astro-/cosmonaut.

On the 3 labels we see Gagarin dressed as a (decorated) civilian, and in an air force uniform.

Posted by rainbowstampsandcoins.blogspot.com at 6:04 PM 5 comments:

I'm posting this second set of Malaysian 'odd stamps' as it's the second issue.
The first stamps (my previous post) was with round stamps, and coins on stamps.
This second emission shows also coins on stamps, but hurray, it's with hexagonal stamps.

The stamps show 5, 10, 20 and 50 sen from the new series of coins.
They are in fact very similar to the Euro coin designs.

Each coin is depicted on two stamps (front and back side).
The face value of each stamp is the same : 60 sen.

Each of those stamps is issued on sheets containing 20 stamps. (10 front side - 10 back side).

Because of the odd shape of the stamps, the sheets are also worth collecting.

to be continued..
Posted by rainbowstampsandcoins.blogspot.com at 10:18 PM 4 comments:

I was nicely surprised by a wonderful set of Malaysian stamps showing coins of Malaysia.
Coins on stamps is a topic that is quite popular among stampcollectors. Also coin collectors sometimes have a small stamp collection with coins on stamps.

For me, this post is extra special, as the stamps are 'round' stamps, so they fit into my collection of 'odd stamps'. 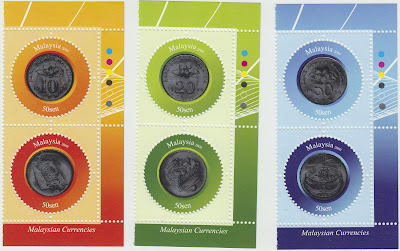 In this set, 3 coins are depicted. There are 6 stamps, two for each coin.
One stamp is showing the front side of the coin, the other stamp shows the back side.

The second coin is a 20 sen coin (KM#52) -
The front shows the value, the back shows a basket, containing food and utensils.

The third and last stamp, shows a 50 sen coin (KM#53), on the front we see another flower,
the back shows a ceremonial kite.


This set of stamps was issued in 2009.
It was followed by another set of coins on stamps, but I tell more about them in my next post.

Posted by rainbowstampsandcoins.blogspot.com at 9:42 PM 5 comments:

Once in a while, I get new material for previously posted items.
Today, I 'm happy to show you another 3D sheetlet.
It was issued in Malaysia in 2011, to promote and show the Excellence of Underground Engineering.

The issue commemorates the Kuala Lumpur SMART Tunnel construction
As Malaysia suffered in the past from many floodings, a solution was sought to keep traffic going on.
Tunnels used to flood, roads as well.
A special tunnel was designed and constructed between 2003 and 2007.
It is called the 'SMART' tunnel : Storm Management And Road Tunnel. (smart, isn't it?)


The purpose of this tunnel is to keep traffic going on under normal conditions even with small floodings of the city. The tunnel is designed to divert the floodwater.

There are 3 modi in which the tunnel can be used :

Only few weeks after opening the SMART tunnel, modus 3 was already activated!

Now back to the stamps...
A sheetlet of 6 stamps were issued, as well as 2 auto-adhesive 3D stamps.
I only have the 3D stamps so far, but in order to show the images that appear when moving the 3D stamps, I'll show a picture of the regular stamsp, as those images are easier to post.

Following images can be seen on the first 3D stamp :

Posted by rainbowstampsandcoins.blogspot.com at 12:06 PM 2 comments:

Now we 'll have a closer look to some of the banknotes posted in the previous article...
We can determinate the country already by the first letter proceeding the serial number.

But there is more...

There is a second code on each banknote, and that's referring to the place the note was printed.

It sounds logic, that the letter before the serial number (see previous post) should correspond with the letter before the printing code.
i.e. a Belgian banknote (serial number starts with a Z) should have a printing code starting with a T.
However, some smaller countries (Luxemburg) does not print their own banknotes.
In case they would do, they might ask other countries (like Belgium or France) to print the banknotes for them.

to be continued ...
Posted by rainbowstampsandcoins.blogspot.com at 3:01 PM No comments:

We can determinate a Euro banknote by the serial number.
However that is not yet a real 'security' mark.

Let's go back to the list of serial codes I gave before :


As you can see I added a number to the list:

As you see, all banknotes above correspond to their controle numbers.
A logic consequence of this system is, that succeeding banknotes should always have a difference of 9 in the serial number :

See for these brand new notes, in order of printing :
as you see, each serial number has a difference of 9 with the previous number. The check sum always remains the same (2 in this case). 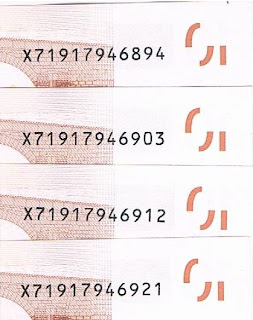 Posted by rainbowstampsandcoins.blogspot.com at 2:56 PM No comments:

I'ts been agaes since I posted something on triangular stamps.
They do exist, and they are still produced, but somehow we hardly see them on letters.

Although this post isn't about a recently issued sheet, (1997), it's more then special.
I didn't know if I had to post it under 'special stamps' or 'special sheets' as both apply here.


It's a triangular sheet, with 4 triangular stamps in it.
Each stamp is repeated twice, so there are only 2 different stamps.


The sheet was issued for the Wold Philatelic Exhibition 'Pacific '97'. It celebrates the centenary of the first pigeon-gram. At the bottom of the sheet, the flight of a pigeon is drawn.
Posted by rainbowstampsandcoins.blogspot.com at 4:41 PM No comments:

Athough the date on the next coins is 2010, these commemorative coins of Turkey were emitted in January 2011.
It's the second set of coins with endangered or extinguised species of Turkey.

The first coin (Ankara cat) is better know as the Turkish Angora Cat.
The name 'angora' comes from the Ankara region, historically known as Angora.

Turkish Angora cats are extremely active, intelligent, and involved.
The eyes may be blue, green, or amber, or even odd-eyed (one blue and one amber or green).
The second coin depices the Sivas Shepard Dog that has its origine in the Kangal district in the Sivas province in Turkey.
This dog is not really a herding dog, but as a flock guardian that lives with the flock to actively fend off wolves.
to be continued...
Posted by rainbowstampsandcoins.blogspot.com at 5:31 PM 3 comments: