In my previous post, I mentionned already 'serial numbers'.
It sounds dangerous, as you rather not encouter something or someone who's title is 'serial' ...

However, serial numbers are intersting and worth exploring.

This post will deal with 'easy' serial numbers on Euro banknotes.
They are easy to determinate and they tell you a lot about the origine of the banknote.

Did you know for example that altough European banknotes who have a similar design all over Europe, still can be traced to the country of origine?
Let's have a closer look :


Each of the above banknotes starts with a different letter.
Each of them was issued in another country.

As you can see it starts with a Z :

First new country will get "C" as first letter.


If you encounter a Euro banknote, starting with an A, B or C... keep it, it's a forgered one
In the picture above, Portugal, Cyprus and Estonia are not represented.

to be continued ...
Posted by rainbowstampsandcoins.blogspot.com at 5:18 PM No comments:

A while ago I started to write about security marks on banknotes.
So far I only talked about basic elements about the paper type.

In this second part, I like to put some other security features in the spotlight.

The first (easy) mark, is the presence of a signature.
Of course signatures can be copied as well, but in combination with other security features, it can help to determinate if the forgery is good or bad (in case of a forgery).
If a banknote is copies with a non corresponding signature/serial number... then the forger wasn't the smartes one.

Let's have a simple look at 3 signatures on Euro notes.

First signature (1) is of Wim Duisenberg, a Dutchman, who became the first precident of the European Central Bank (ECB).
He remained president until November 1, 2003.

Second signature (2) is from Jean-Claude Trichet. He succeeded Duisenberg,due to an agreement made before.  Trichet was president for exacly 8 years, as he was succeeded on November 1, 2011.

Current president of the ECB is the Italian Mario Draghi (3).


to be continued...
Posted by rainbowstampsandcoins.blogspot.com at 4:28 PM No comments:

For this new post, I'm going back to teh Tour de France, the world famous cycling competition, held in France.
In 2013 the 100th "Tour de France" will be cycled, but in 2003 it was the 100th anniversary of the first event.


I don't know what biking has to do with hexagons (as wheels are generally round), but hexagons do have a connection with France .

The shape of the country fits in a hexagon (not a perfect one, but nearly).

The hexagon can also be found on the Euro coins of France : 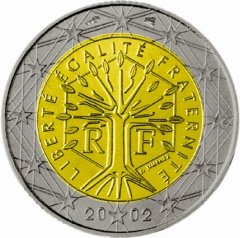 
to be continued...
Posted by rainbowstampsandcoins.blogspot.com at 11:31 AM No comments:

One of the most remarkable stamps with hexagonal stamps was issued in India.
In fact it 's a set of 2 stamps, 5 rupees and 15 rupees.

Of course, that alone is not enough for postal services.
Both stamps were issued in sheets.
Unfortunatly not just one sheet, not two, not even three.... but four different sheets!

Only two stamps, but in order to have the full set of sheets ... you'll paid 520 rupies (in stead of 20 rupees).
The stamps and the sheets are really nice but in my opinion, a bit of a rip off for Indian stamp collectors.
All sheets were issued in 2008. Thanks to my loyal contacts in India, I was lucky to obtain all 4 sheets, because I noticed that after a short time, those sheets were not available on the Indian market anymore. And that's not for the benefit of the individual collectors.

In this new post, a beautiful sheet from Liechtenstein.
Altough Liechtenstein is just a very small country in the European Alps, it's very popular amongst stamp collectors for their heigh quality stamps. 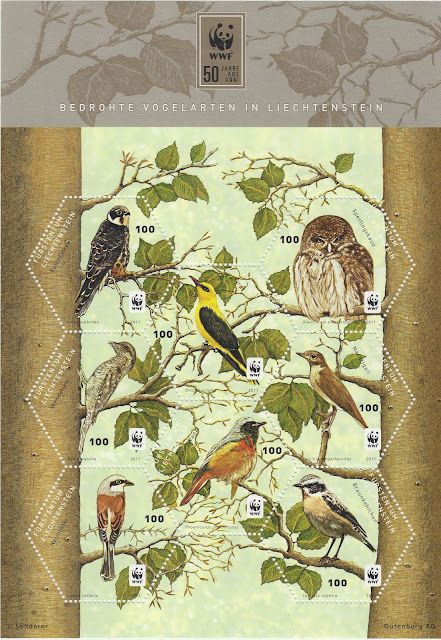 Of course, the purpose of stamp emitting is to sell as much as possible, also in Liechtenstein.
In this sheet, that is completely auto adhesive, there are 8 stamps on endangered species (birds) of Liechtenstein. With an additional logo of the WWF, this sheet will be wanted by a lot of collectors.

Let's have a closer look.

The sheet was issued in 2011, but might be unavailable already, due to the high demand.

Posted by rainbowstampsandcoins.blogspot.com at 6:50 PM No comments:

It has been a long time, but never to late to post something on 'odd stamps' :)
One of the first articles was about silver stamps.

Today I'm presenting a silver stamp from France.
It was emitted in 2011 and deals with rugby.

The stamp is emitted in a cardboard card (size of a bankcard) and the stamp itself is protected by a plastic foil. (Silver shifts colour when exposed to oxygen / air).

On the front side of the card, you 'll find a rugby field, the stamp is placed in the middle of the field and shows 2 rugby players.

Face value of the stamp is € 5,-
Finding this stamp postally used will be very difficult, as 5 Euro is a value that is not common for sending regular mail abroad from France.

to be continued ...
Posted by rainbowstampsandcoins.blogspot.com at 2:07 PM No comments: