One of my first postings on odd stamps, was dedicated to perfumed stamps.

Not many countries issue this kinds of stamps, but luckily, Belgium continued this good tradition.
And what flavour is best to add to belgian stamps... of course chocolate! 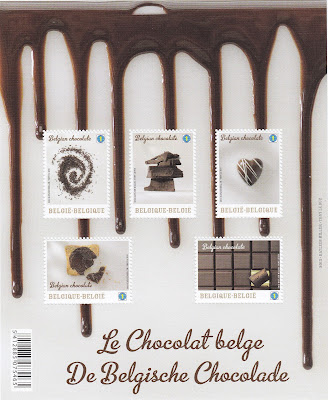 The chocolate is almost dripping off of the sheet, and a strong chocolate perfume makes you almost bite into the sheet.

We see on the sheet different kinds of presentations of chocolate: sprinkles, solid blocs of chocolate, pralines, chocolate spread and a regular chocolate bar. 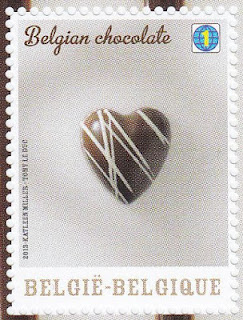 The small globe on the stamps shows that the stamp is not intended for use within Belgium or even within Europe.

Belgian chocolate is delicious, but at those rates, you have already half a kilo of real belgian pralines...

Posted by rainbowstampsandcoins.blogspot.com at 4:21 PM No comments:

On the back side of the new 5 euro notes, we find some new items:

We see a new type of serial number with two letters and 10 numbers (in stead of 1 letter and 11 numbers).


Since the European Union is expanding, new countries and languages are introduced.
Bulgaria is using the cyrillic alphabet, and therefore, "EBPO" (the bulgarian way to say EURO) is added on the notes.

A security feature that was used in the first series, and that is repeated in this set, is a gold print on the back of the note.
The number 5 and the Euro symbol (€) is visible when you hold the note on it's side.

The other banknotes will be renewed in the future too...
Posted by rainbowstampsandcoins.blogspot.com at 4:51 PM No comments:

Le beaujolais nouveau est arrivé...
Wine lovers will know this expression, when the new beaujolais wine is introduced every year.

I'm not going to talk about wine however, but about the new '5 euro' banknote, and it's security features.

I had to take a picture from the internet, as it's impossible to scan the banknotes I have.
(Of course that's the purpose of the security features, that scanning becomes impossible).


First thing we notice is the silvery stripe (1) on the right hand side of the note. 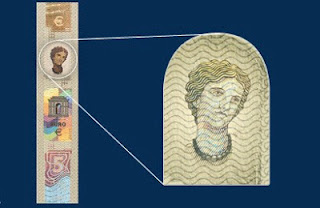 We see the head of the Greek godess Europa, and holding the banknote in the light, the same head apprears as watermark.

Secondly, the code that refers to the printing company (2), is now clearly visible next to the silvery stripe on the right hand side of the note

A third (3) new thing, is the colour shifting 5
Previously only € 50 notes and higher, got a colour shift ink. Now this feature is also used for the 5 euro note.

The ink on both ends of the note's front side palpable and will help blind and impaired people to recognise the notes better (see 4). Also the large "5" on the front side of the note, is printed in the same way, and is palpable.

For the first time, a year (2013) is printed on the notes (5).
We also notice more abbreviations then before on the note. Bulgarian and Czech is added. (6)

Finally, (7) the signature of M. Draghi, gouvernor of the European Central Bank has been put under the European flag.
Posted by rainbowstampsandcoins.blogspot.com at 11:24 PM No comments: