I knew about the following stamp already, but as usual the hardest thing about it, is to find it.
Especially since it's a 'stamp' from Micronesia.
That's a state not next to my door, and I guess to no ones door at all.

Micronesia is a relatively new country when it comes to stamps.
And they are doing anything to get into the attention of the collectors.

As for my theme collection on 'odd stamps' this big stamp (51 by 68 mm) is the highlight of this month for sure.

The stamp is completely made out of embroidery and is 2 mm thick.
I doubt if this 'stamp' will ever appear on a letter, view the high face value of $ 8.
When you peel off the paper foil at the back, you'll notice that the stamp is auto adhesive

If this is not one of the weirdest stamps in my collection, for sure it's the softest stamp I have.

More to follow
Posted by rainbowstampsandcoins.blogspot.com at 7:37 PM No comments:

The last set of TOR - coins only have few interesting marks, or even none at all.

Both countries have the logo of their national mint mark on the coin.
For Portugal it's :  INCM  "Imprensa Nacional – Casa de Moeda" (National Currency – Mint House) abbrev.

The last 3 coins don't have any mint mark at all

Posted by rainbowstampsandcoins.blogspot.com at 2:54 PM No comments:

Let me continue with the TOR coins.

13 countries participated in the first common design.
All together emitting 17 coins, as Germany has 5 different coins.

Finlands coins are more rare then most other coins in this set. As Finland has no countries next to them that are using Euro coins as well, the finnish coins don't get spread that easily.


1. the finnish mint mark can be found in the outer circle of the coin.

is the mint mark of the finnish mint

Together with german coins, french coins get spread widly all over Europe.
The french coin has two mint marks too?

1.  The cornucopia can also be seen on some coins of Luxemburg, but it's a french mint mark.

2. The hunting horn and waves is the master mint mark of H. Larivière.

Not all greek coins are made in Greece.
Some of them are minted in Spain, Finland or France.
In that case they bare the letter E (Spain), S(uomi - Finland) or F (France) in one of the stars.


1. the accantus leaf is the symbol of the Athens Mint

The last coin for now is the italian TOR coin.
Italy doesn't put 'treaty' of Rome, but 'treaties' of Rome, as there was more then one agreement that was signed on this event on March 25, 1957.


1. treaties of Rome
2. "R" mint mark of Rome
Posted by rainbowstampsandcoins.blogspot.com at 2:38 PM No comments:

After a long introduction, finally the TOR-coins.
TOR stands for Treaty of Rome and eurocollectors often refer to TOR-emmision to indicate this special issue of the 2 euro coins in 2007.

In 2007 the first 'common design' was issued.
This in remembrance of the 50th anniversary of the Treaty of Rome in 1957.


The design shows an open book, (with the treaty), the text "Treaty of Rome" in all individual languages, the year 2007 and the name of the issuing country.

The first coin is the most interesting one : Belgium


1. Because of all national languages in Belgium, Europe is "EuropA" in Dutch and German and "EuropE" in French. To avoid language problems, EUROP A/E is on the belgian coins.

2. As it was impossible to print 'treaty of Rome' in the 3 national languages, an original solution was found... "Pactrum Romananum Qvuinquagenarium" (the latin translation) can be found on the coin.

3. However the country's name again is in French, Dutch and German again

4. Scale : mint master mark of Romain Coenen (from 2008 on all belgian coins)

Another unique coin is the coin from Luxemburg

Luxemburg has a law that says that the head of state (i.e. Grand Duke Henri of Luxemburg) should always be present on the coins. This is a problem with a 'common design' for all european countries. But the luxemburgians (or Lëtzebuergians) found an elegant solution to that problem.

A small circle was added with the Grand Duke's face. 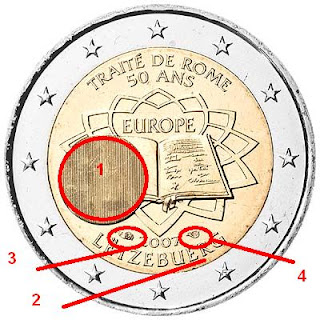 1. The Grand Duke Henri of Luxembourg appears on the coins facing to the left. He was not featured on the Luxembourgish franc as he only became Grand Duke in 2000 following the abdication of his father, Jean. Jean's portrait on the francs showed him facing to the right and it is common in a number of countries for successive monarchs to alternate the direction they faced on coins. Other euro coins issued by member states which are monarchies show their monarchs facing to the left, in common with the effigy on their legacy currencies.

2. Lëtzebuerg is the name of Luxemburg in the national language.

the cornucopia, a French mintmark, since all luxemburgian coins of 2007 and 2008 were minted in France 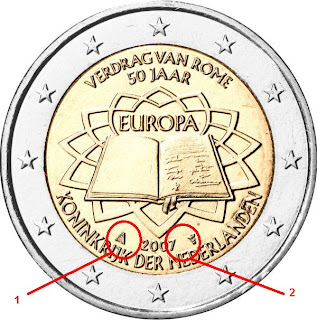 1. Sailboat, master mint mark of Maarten Brouwer.
Since 2003 on the dutch coins 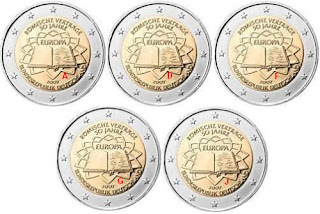 Next to the year 2007 : 5 different letters can be found on german coins :
They refer to the state and city they are minted. In fact we're talking about 5 different coins.

Posted by rainbowstampsandcoins.blogspot.com at 7:37 PM No comments:

There are thousands of blogs already dealing with the topic of Euro coins.

So why this on my blog as well ?
Well in order to make a difference, let's try a different approach ...

1957 was the year that the movie "12 angry men" was issued.
12 angry men, tells the story of a jury made up of 12 men as they deliberate the guilt or acquittal of a defendant on the basis of reasonable doubt. In the United States (both then and now), the verdict in most criminal trials by jury must be unanimous one way or the other.

In the beginning of the movie, 11 member of the jury plead 'guilty' and only one is convinced of the innocence of the suspected murder. As discussions go on, one by one reviews their opion and by the end of the movie, 11 out of the 12 are in favour of voting 'non-guilty' and only one is convinced the accused should be found guilty.
Finally the accused is found not guilty by all of the jury members, and this thanks to the effort of one in particular who can convince everyone else...

Maybe the link with the 12 angry men is a bit fetched, still I see some point of comparison

Isn't 12 also the number of participating states of the European Union?
Not that the European Union is guilty to anything, but didn't it take a lot of discussions, in confined places? With few member states taking the initiatives... in order to get everyone so far to give up some personal objections in favour of a greater ideal?

On March 25, 1957, some 'angry' men from Belgium, the Netherlands, France, Wester Germany, Luxemburg and Italy, gathered in Rome.
In 1951, the same 6 countries already agreed on a european cooperation for Coal and Steel. This second set of Treaties made the base for all european cooperation in the future.


The 50th anniversary of the Treaty of Rome was celebrated on 25 March 2007. The Treaty of Rome established the European Economic Community and notably paved the way for the introduction of the euro in 1999 and euro banknotes and coins in 2002. The euro-area Member States had decided to issue a common commemorative 2-euro circulation coin on this occasion. It has been agreed that the design presented on the national face should be the same in all countries. The European Mints have organised a competition to select the most attractive design.

A jury (once more) composed of Ms Berès, representing the European Parliament, Mr Junker as President of the Eurogroup, and Commissioner Almunia, selected on 5 May 2006, the design of this commemorative coin which was issued in 2007. The winning design shows the Treaty signed by the six founding countries on a background evocating the paving (designed by Michelangelo) of the Piazza del Campidoglio in Rome, where the Treaty was signed on 25 March 1957.


more about the coins in my next post ...
Posted by rainbowstampsandcoins.blogspot.com at 5:52 PM No comments:

As I told you before, the duo-stamps are in fact 5 stamps + labels that are sold for the price of 10 stamps.
The labels are very nice and "gefundenes Fressen" for theme collectors; but a bit of a rip off, as you aren't buying stamps actually.

But for the purpose of this blog of course... I bought the duo-stamps so that I can inform you all on my topic of Tintin-related stamps.

I guess you all won't mind.

Posted by rainbowstampsandcoins.blogspot.com at 9:43 PM No comments:

Collectors of Tintin stamps will be very interested in this issue,
yet, it's not really a Tintin-stamp...

It's a so-called 'personal' stamp, issued by belgian postal authorities.
This is a weird, but logically solved solution to 'personal stamps' that are appearing more and more these days.

First of all, there are no so-called 'personal stamps' in Belgium.
At least there are personal lables, additional to 'official stamps'.

Belgium made a smart move not to start issuing tons of 'private' issues that will never appear in catalogues.
They simplye made a neutral stamp and attatched a label to it that can be used as a 'personal stamp'.
The only official stamp is the white and red stamp on the right hand side.
The second part, is a personal label that can be ordered through the website of the belgian post.


But now comes the tricky part ...
Anyone can order 'personal' labels with the real stamp attatched to it.
Except, postal services have emitted "duo" stamps on their own as well.
These are exactly the same as the 'personal stamps' ; i.e. offical stamp with personal label.

The 'officially' issued 'personal stamps' are emitted for special occasions such as weddings, birth, new year, ...
or for famous belgian comic book characters, like Tintin.

But only the white-red stamp is a real stamp.
Question is now, is this a set of 5 stamps now? or is this 5 similar stamps with 5 different labels?

Fact is, theme collectors, and collectors of belgian stamps, want those 5 'duo-stamps' for their collection, but forget that they are paying 10 times the price of 1 stamp and they receive 5 identical catalogised stamps.

to be continued...
Posted by rainbowstampsandcoins.blogspot.com at 9:28 PM 2 comments:

Austria is the leading country in Europe when it comes to 'odd' stamps.

Another example is the following 'stamp'.
This sheetlet isn't really a sheetlet either.

It's a rectangled gummed sheet, but the oval stamp in the middle isn't really a separate stamp, since the perforation is printed and not real.
The design is embroidery and is at least one mm thick.

This embroided texture was glued to the sheet.
Face value of the sheet / stamp is € 2,65.
So far, I haven't seen any postally used versions.

It's not easy to find those odd stamps, as they are quite expensive, and wanted.
This item was made in 2010.

Posted by rainbowstampsandcoins.blogspot.com at 6:08 PM No comments: