In my first post, I mentionned already the different signatures on the Venezolan banknotes.
In this post, I like to go in a bit deeper to this topic.

Next to the signatures above, also the printing dates are mentionned on the notes.

to be continued ...
Posted by rainbowstampsandcoins.blogspot.com at 3:22 PM No comments:

From the notes in circulation, there are 10 printing dates know.
Which gives a possible range of 60 different notes.
However some issues are not know (probably not even issued). 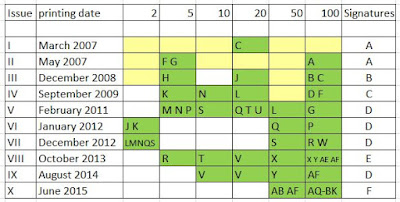 In yellow are the known issues of the banknotes of each value.
In green the ones I have in my collection, with some of the seen serial numbers.
I guess, the yellow coloured fields will represent the missing numbers, starting with A in 2007.

In the right column, I refer to signature combinations as they apprear on the notes.
A visual of those signatures can be found in my previous post on Venezolan currency, and will be discussed in later posts.

Finally the white fields refer to years where no note was printed, or at least where no information was available at this moment.

Anyone with more information about this matter can always leave a message, it will be greatly appreciated.
Posted by rainbowstampsandcoins.blogspot.com at 4:30 PM 1 comment:

When you plan to Visit south / latin America, Venezuela might not be the first country that comes into your mind for touristic reasons - however there is a lot to see as well!
But Venezuela is definitely a very intersting country to visit, for banknote collectors.
And this for various reasons.
First and for all, the circulating money, is for 99 % consisting out of bank notes.
Although there are some coins still in circulation, the value is so low, that they are hardly used.
From the coins I have in my collection, only few I got back as change. All the others were 'found' on the floor of subway, in public phone boxes or even just on the street.

After the devaluation of the bolivar in 2007, 6 new notes came into circulation.
2, 5, 10, 20, 50 and 100 bolivares fuertes (strong bolivars) - all notes are very nice, good quality printing, beautiful design, .... although the actual value is quite low, the printing is outstanding, but I'll come back to that point later on.

A third reason to collect the notes, is that the notes were printed on several dates.
So far there are 10 different printing dates - and although not all notes are confirmed to be printed each time, it gives the possibility of 10 times 6 notes = 60 different banknotes in circulation.

In my later reports, I will go into detail for each note and the know issues of the printing dates.

For a quick overview, here are the 10 printing dates so far :