The Rat is the first animal in the zodiac cycle.
But since the special sheets started in 1997, we started this set of articles with the second animal.

The first animal on the last sheet, and maybe the most spectacular one of them all...

The corners of the sheet are cut in a special way, following the decoration on the sheet.

In this sheet, the stamp is not a rectangle, but in the shape of a barrel.

Almost the whole sheet is embossed, the rats (both on stamp and decoration), but also all other animal of the zodiac cycle, that are placed around the stamp of the rat.
The decoration (corner and outline) are also embossed.


Finally, as seen previously on other sheets, also this sheet has a label with the bar code, attached to the side of the sheet.
The Rat type is very sociable. Such people are full of charm and vivacity, and love being surrounded by people. In case of something not goes like planed they are able to quickly assess both the hindrances and the new chances, and while others are wondering how to react and what to do, these people have already seen and taken advantage of the opportunity that lies there. They are usually strong-willed and ambitious. On the other hand they should be careful not to force their ideas on other people. Generally these people enjoy all forms of social interaction, and no party is complete without their lively wit and humor.

After this sign, we go back to the Ox

We are reaching the end of the Zodiac series, issued by Canadian post.

The second last sheet, issued in 2007, is for the year of the Pig (Boar).
This is the last animal in the cycle, but as we started with the second one, there is still the 'first' animal that will be explained in my next post.


The Boar type is usually an honest, straightforward and patient person. Such man is a modest, shy character who prefers to work quietly behind the scenes and when others disappear he/she is often there to offer support. This type of people is reserved with those who they know not too well, but as time passes and they gain confidence those around may discover a lively and warm-hearted person behind that mask of aloofness. In spite the fact that those who born in the year of pig have a wide circle of friends and acquaintances, they have only few close friends who understand them and share their inner thoughts and feelings. It is easy to put trust in pig type; he/she won't let you down and will never even try to. Such people simply want to do everything right according to the social control.

After the Crux-stamps, a new stamp was issued in 1891.

This new stamp symbolises 'liberty' after the era with the Emperor.
The image of 'Liberty' is very similar to the French "Marianne" stamps, and other liberty-images.

The stamp was issued in 2 colour variations and can be determinated quite easily.
Both variations have the same value in most catalogues.
Perforation vary from 12.5 to 14.


When we look at the bonnet of the Libery woman, we see similarities with the French Marianne :

Thistory of the red bonnet, and the special shape of the bonnet, is older then the Brazilian stamp (1891) or even the French Revolution (1789).

The story goes that the mythical King Midas was the first who wore the cap.
King Midas - the king in Greek mythology who turned everything he touched into gold - was one of the last kings in the dynasty of Phrygia (now Western Anatolia, in Turkey).
One day, the Greek mountain god Tmolos organised a competition between Apollon and Pan, to decide who was the best panflute player. Apollon - god of music - was given the victory, but King Midas disagreed and claimed that Pan was a better player.
As usual in Greek mythology, it's never smart to insult the gods, so Tmolos condamned Midas. As Midas was not worth having human ears, he was given donkey ears.
To hide his ears, he wore a so called Phrygian cap.


We can encounter this Phrygian cap also in the national symbol of Argentina:

But even in Brazil self, the cap is not unknown. However in another background.
In Brazilian folklore, the "Saci" is known, as a little gnome.
He has only one leg, smokes a pipe, and ... wears a similar cap.

He's responsible for small incidents and accidents in and around the house.
Taking his cap, is also taking his power.

Finally, and maybe I'm too far away from the original idea, but as we are talking about gnomes...
The Belgian Smurfs might be related to them too... at least Papa Smurf has a red cap and is a kind of gnome (but a good one).
And isn't Papa Smurf fighting for liberty for his little smurfs ...

Posted by rainbowstampsandcoins.blogspot.com at 6:17 PM No comments:

The 10th sheet in the series of Zodiac signs, is reserved for the year of the Dog.

The Dog is the most likeable sign in the Chinese zodiac. Like his animal namesake, he is loyal with a capital "L". He is the one, who people are most likely to turn to when they need help, and the dog person will come through every time. That is because the dog person is sensitive to others and empathizes with them, particularly if someone has suffered an injustice, reacting quickly with the same feeling, as though he/she had been personally offended. Friends value these qualities, and know that they can rely upon their dog friend to keep a promise or remain cool in a crisis. Dog types are honest, intelligent and straightforward. They will take on any responsibility that is given to them and you can be sure that they will do their job conscientiously and well.

Dog people are often born old and get younger as they age. They take everything very serious. You may hear the Dog complains a lot about street lamps, about traffic, or about weather, but as he gets older, the less he takes his own criticisms seriously.

The sheet is simply beautiful again. And so is the stamp on the sheet : 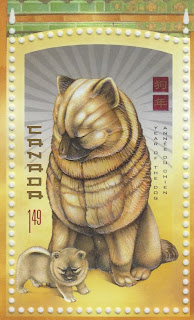 This year's issue is rather 'modest' but the sheet is still impressive.
The dog is embossed again, and we see that when we flip the sheet again:
Also the dog on the sheet (next to the stamp) is embossed, as well as 2 squares. 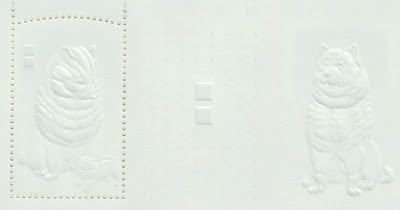 Canada's 9th sheet in the series of Zodiac signs, is dedicated to the Year of the Rooster.
The rooster is the 10th sign in the cycle.

People born in the year of Rooster are very usually observant. Most of the time, they are very accurate and precise with their observation. These people certainly love find themselves in the spotlight, they love entertaining friends and adore meeting new people, and even unexpected and uncertain circumstances are not a barrier for them. It is almost impossible to find someone born in this year looking dowdy or untidy. The fact is that these people are usually one of the best dressed and groomed of all other people. They are actively interested in clothes, colours, and accessories, and usually are very critical about their own appearance as well as about appearance of those they are surrounded by. People born in the year of rooster like to be noticed and flattered. Such person might dress a little flashily with this in mind, but in his heart, he/she is completely conservative. Roosters - type always appear attractive and beautifully turned out. They are sociable and love to receive attention. Others may criticize them for being exhibitionists but the fact that they are a compassionate, wise and have a brave nature which comes to the fore when others need their help makes up that deficiency.

This year's issue is rather 'modest' but the sheet is still impressive.
The sheet is printed in gray colours, and the stamp itself is breight, with golden feathers on the rooster.
Parts of the stamp and two squares on the sheet are embossed.

After my introduction to the 'Southern Cross' in my previous article, now to the real reason why I posted it.


The southern cross is not only present on the flag of Brazil, it was a topic of the first stamps that were issued after the republic was declared in Brazil.

One stamp, emitted in 1887 has this cross too, but the stars are way bigger.

So roughly said, there are 10 different 'Cruzeiros'.

Posted by rainbowstampsandcoins.blogspot.com at 3:54 PM No comments: