What's the best way to post an Easter article...
with eggs of course.

In this series of 'round' stamps, I also included some oval stamps before.
Since 'eggs' tend to be more oval, the following two sheets deal with oval stamps.

Let me situate the origin of the stamps.
They come from a tiny island 'Bequia'.
To find it, we go to the Caribbean :

We zoom in into Saint Vincent and Grenada islands : 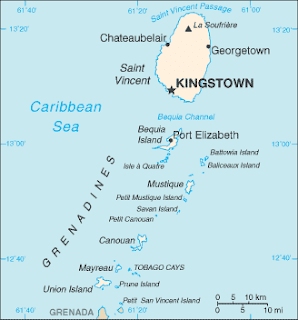 However, the article of today is about the odd stamps :

Happy Easter
Posted by rainbowstampsandcoins.blogspot.com at 6:56 PM No comments:

I wrote already about trapezoid stamps (http://rainbowstampsandcoins.blogspot.com/search/label/trapezoid) but there are more stamps in that shape.

I was on a stamp fair and that's where I found the following stamps of Tanzania.
They are CTO - unfortunatly - but from some countries that's more or less the only way to obtain the emitted stamps.
We see a weird combiation of prehistorical animals

and, the other values shows animals that are still alive:

This weird set is fun for children and for me (as I like the shape) but for collectors not really a hot item.
The fact that they are all CTO makes the whole set even less interesting.
However, I can't keep them away from my blog, as the 'oddness' is there...
Posted by rainbowstampsandcoins.blogspot.com at 7:21 PM No comments:

The next episode in the (almost) never ending story of commemorative coins of Thailand.

In 2005 (BE 2548) a coin was emitted to honour the Treasury Department.
This department, is part of the Thai Ministry of Finance.

The seal is rather small depicted on the coin.
It shows a dragon with wings - phoenix with tail.

Earlier issued, but with a higher number in the catalogue, is the next coin.
Again, a commemorative coin, to celebrate the 70th anniversary of the Royal Scolar Board.
The foundation of this institued in 1934, took place under King Rama VII (King Prajadhipok).

On the coin, both kings, King Rama VII and King Rama IX are depicted.
The back of the coin shows teh Royal Scolar Board's seal.
Y # 412

The last coin for today, is not for an anniversary, but was issued at the occasion of the World IUCN Conservation Congress, that was held in Thailand in 2004.
IUCN is the International Union for Conservation of Nature.
Again the front of the coins shows the bust of King Rama IX, the back of the coin shows the logo of the IUCN.

The congress was held in Bangkok in November 2004, under the titel : "People and Nature, only one world..."
more to follow...
Posted by rainbowstampsandcoins.blogspot.com at 9:42 PM No comments:

It's been a long time since I posted something on Israeli stamps, regarding zodiac signs.

The set I posted earlier : http://rainbowstampsandcoins.blogspot.be/2011/05/theme-zodiac-signs-02.html

Now I proudly present two FDC's with the full set of stamps cancelled on Feb. 27, 1961. 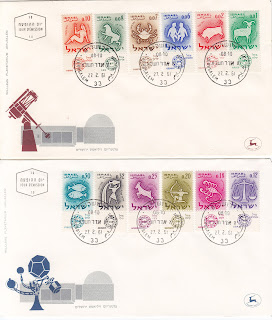 Honestly, I'm not a big fan of FDC's, as they are all CTO cancels, but on the other hand, it's a good way to collect clear cancels on all stamps of a certain set.
An FDC (First Day Cover) also gives you some extra information.

As you might know, Hebrew's language is written from right to left.
Therefore, you can see that the set starts in the right hand corner and values add up gowing to the left.

All stamps have their TAB. This is very typical for Israeli stamps.
On each tab you can see the latin name of the zodiac sign, as well as the circle with all 12 signs.


I noticed it before, but also here you can see that the tab on 2 stamps (Virgo and Leo) is shorter then on the other 10 values of the set.


Posted by rainbowstampsandcoins.blogspot.com at 10:07 PM No comments:

It doesn't happy too often that I find a new item for my theme collection.
But today I found.

I wrote about Tintin stamps, issued by the Netherlands in my previous posts, http://rainbowstampsandcoins.blogspot.be/2011/04/theme-tintin-kuifje-2.html

To celebrate two Dutch cities : Hattem and Urmond, who were commemorating their 700th anniversary in 1999 and 2000, the two Tintin stamps were placed on two individual covers and cancelled with a special cancel.


Let's have a closer look

Hattem is a city in the Dutch province : Gelderland; (central-east) and got it's city rights in 1299.
In 1999 they celebrated their 700th anniversary.

There are no written documents that state that Urmond got city rights in 1300.
The oldest remains date from the 12th century, but the (now) village itself, claims to have the rights since 1300. Therefore, the cancel on Jan. 1, 2000 (also 700th anniversary).
Urmond is now part of the Dutch city 'Stein', in the province Limbourg.

long time ago, two countries, Belgium and the current 'Netherlands'.
A country with a turbulent history of monarchs, from popluar, to extremely unpopular and back to very popular...

A small overview of the Kings and Queens who were ruling the Netherlands since 1815.


There is something special about the coins and the stamps...

First King Willem I (Guillaume I):

She wasn't really Queen, her title was Queen-regent until her daughter Wilhelmina succeeded the throne.
There are no circulation coins with Queen (-regent) Emma.

King Willem - Alexander will be the new monarch on the Dutch coins... guess what side he will be facing... 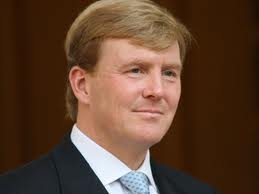 Posted by rainbowstampsandcoins.blogspot.com at 10:38 PM No comments: