Estonia is one of the three Baltic states, and is therefore often named together with Latvia and Lithuania. It is the most northern Baltic Republic.
The language of Estonia however is more related to Finnish, than to the other two countries.

The country has a long history, and they declared their independency already in 1918, by the end of the first world war. Its true independency was rather short, as it came under Russian influence.
In their attempt to fight for an own republic, they fought with Germany against Russia.
This resulted in being put under Russian influence after the war.
In 1990, the Sovet Union dissolved and many states regained their independency again.
So happened in 1991 with Estionia.

The silver € 10 stamp, commemorates the (1st) independency of 1918.
Silver is vulnerable to oxygen, and therefore, the stamp is issued in a plastic box. 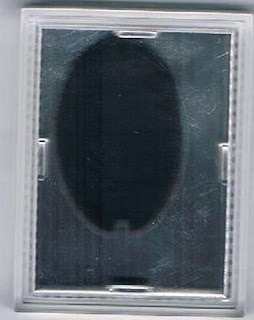 At the back of the stamp, a sticker is placed to make the stamp adhesive.
Opening the box, in order to use the stamp, would result in discolouration, and lost of the image at the front of the stamp.
The image is rather simple, we see the coat of arms of Estonia, and 100 written as 18.

This special stamp has a limited edition of only 40,000 copies.
They were printed at the Dutch printing office of Joh. Enschedé.
For the design of the stamp, all credits go to Indrek Ilves.

Estonia celebrates its independency day on Febrary 24.
Posted by rainbowstampsandcoins.blogspot.com at 7:12 PM No comments:

Letter boxes on stamps, they are double as interesting as they show stamp history on stamps.
Greek postal services issued a set of 4  (8) stamps on this topic, to commemorate 190 years of the founding of the Hellenic Post, by the first Governor of Greece, Ioannis Kapodistrias.
Underneath the letter boxes, we see, in greek capital letters : "190 χρόνια ελληνικά ταχυδρομεία";
which means as much as 190 years of Greek (Hellenic) post. 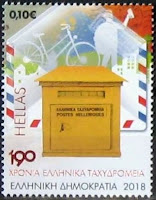 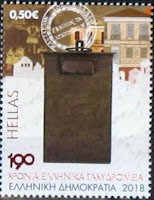 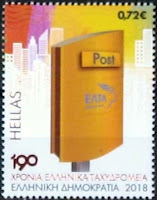 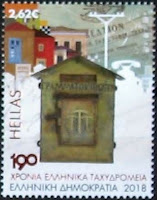 A week later, the same stamps were issued in a sheetlet of 8 (2 of each), with another perforation 13,25 x 13,25. This sheetlet was printed by Cartor Security Printing
They come in a sheet of 4 - so each stamp twice.
The letter boxes are printed in gold/bronze emobssed printing, and only 10,000 sheetlets were made. 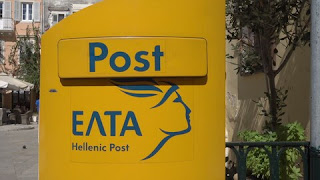 Posted by rainbowstampsandcoins.blogspot.com at 5:57 PM No comments: