Some time ago, I posted a stamp on silk, that was issued in 2012 :
https://rainbowstampsandcoins.blogspot.com/2013/02/odd-stamps-06-g-stamps-on-cotton.html

It is part of a 12 year project on chinese zodiac signs.
This week, I had the opportunity to buy another sheetlet from this series. The sheetlets are issued by the Hong Kong postal authorities, and are similar in style and colours.

The sheetlet, printed on silk was issued in 2014 to celebrate the year of the Horse.

It is part of a 12 year program and each stamp comes with a certificate of authenitcy.
Looking forward on finding more of the set.
Posted by rainbowstampsandcoins.blogspot.com at 10:29 AM No comments:

This is the 4th article about the Danish banknotes (series 2009).
To remain in the theme of the notes, again a bridge is depicted on the note.


The Queen Alexandrine bridge (Dronning Alexandrines Bro) is a road arch bridge that crosses Ulv Sund between the islands of Zealand and Møn.

Queen Alexandrine understood how to navigate as part of the Danish constitutional monarchy through the turmoil of two world wars and the breakup of many European monarchies after World War I. She understood her emerging role as a “celebrity” and as part of the model for a royal family and that she remained bound by tradition. She used her charm and informality to reduce the gap between the royal house and the Danish population – making sure that the royal family stayed in their hearts in a time where society was changing.

In Danish history research, Queen Alexandrine is mostly seen as a quiet and amiable queen.
Until now, Danish Kings and Queens (Margarete II) are loved by a large part of the population.

Similar to the other banknotes, a holographic image on the front side, is repeated on the reverse side of the note.
The Keldby Vessel is not a Klingon space ship, but a bronze bucket, or more likely a wine container, from around 300 BC, it was found in the Keldby area and can be seen now in the Danish National Museum.

As on the previous notes, a small map of the two locations (Queen Alexandrine Bridge and Keldby) are shown.
Last post on the Danish banknotes so far, the 500 DKK-note.

There is also a 1000 DKK note in circulation, but not in my possession (yet).

maybe more to follow...
Posted by rainbowstampsandcoins.blogspot.com at 9:25 AM No comments:

Next on the list on danish banknotes, is a 200 DKK-note.

The front side shows us a bridge once more. The bridge in the image is the Knippel's Bridge
"Knippelsbro" is a bascule bridge across the Inner Harbour of Copenhagen, Denmark, connecting Børsgade on Zealand-side Slotsholmen to Torvegade on Christianshavn.
The history of the bridge dates back to 1620! After several wooden bridges, the current bridge (the sixth one), was originally known as Store Amager Bro (English: Great Amager Bridge) or Langebro (English: Long Bridge).

Further on the front side of the note, we see a holograpic image of a shield. As the image is not that clear, we have to look on the reverse side of the banknote, to see what it is about.
It is an image of the Langstrup belt plate, a piece of decoration from the early Bronze Age (1400 BC).
The Langstrup belt plate was found before 1880 together with a bronze knife and spiral
bangles. The decoration is composed by circular grooves and spirals, stamped probably by means of some standard punches into wax model before casting. Belt plates were worn by women on the front of their belts.
The numbers are the turns of the spiral, counted at two different radial directions. The roman number gives the corresponding annulus.
"It has, apart from the point, four zones with 15+22+26+32 = 95 spirals in all. Still, a numerical pattern does not seem to emerge. However, if one … multiplies by the number of the factor of the zones, the sum of the spirals turns out to be 15×1+22×2+26×3+32×4 = 265, or exactly the number of days in 9 months of the Moon-year (265½), or, incidentally, also the length of the average human period of pregnancy...
Going one step further, and again multiplying with the zonal factors, but now incorporating the point of the Langstrup belt-plate as Factor 1 (but with the value of 0), a sum of 0×1+15×2+22×3+26×4+32×5 = 360 appears."

More to follow ...
Posted by rainbowstampsandcoins.blogspot.com at 10:05 AM No comments:

For the second banknote in the 2009 series, we go to two places in Denmark:
On the north of the map, a bridge between Snoghøj on the Jutland side to Middelfart on Funen.
The bridge depicted on the front side of the 100 DKK-note, is the "Old Little Belt Bridge" (Den gamle Lillebæltsbro). The bridge was opened in 1935.
We see in the left corner a kind of holographic image, which returns on the reverse side of the note.
The image in detail is the Hindgavl Dagger, an artefact from 1900 - 1700 BC. It was found on the island Fænø; an island in the heart of Denmark. 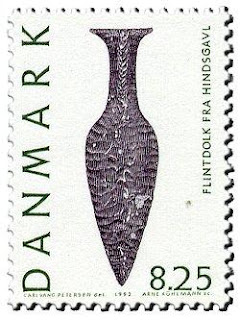 It's an amazing artifact from Denmarks neolithic era. The blade of the dagger is hardly 1 cm thick.
It can be admired in the National Museum of Denmark, in Kopenhagen.
to be continued...
Posted by rainbowstampsandcoins.blogspot.com at 8:41 AM No comments:

Not all countries in Europe are using EURO as their currency.
So isn't Deenmark, which is located in the north of Germany (only land border), between the North Sea and the East Sea. It's connected to Sweden by a brigde (see my article on Swedish currency).

Denmark itself is the smallest of the Scandinavian countries, but it forms the Kingdom of Denmark, together with Greenland and the Faroe Island, who are autonomous constituent countries.

The first note is already something special : the 50 koner-note...
On the front side of the 50 kroner-note, we see a detail of the Sallingsund Bridge. With 1.717 meters, the  Sallingsund Bridge (Danish: Sallingsundbroen) connects the island of Mors with the peninsula of Salling, in the north western part of Denmark. It is the fifth longest bridge in Denmark.
The hologram on the front, returns in de picture on the reverse side of the note.
It represents the Skarpsalling Vessel (a clay vase or pot) found in east side of Denmark.
On the map, on the banknote, both bridge and vase are located.

There is something more about the banknote, that you might not have remarked at first sight.

First thing in Danish language, is that they use some archaic constructions for numbers.

Secondly, Danish numbering is 20-based and not 10-based.
Compare to the French, Swiss, french speaking Belgians .... 80 is quatre-vingt (4 times 20).
Although also 'octante' or even 'huitante' is used in Switserland...

To be complete : the multiples of ten, above 50 - should be considered as multiples of 20, and the 'multiplier' is one half away from the higher integer...

The base 20 numeral system is also called the vigesimal system.

Posted by rainbowstampsandcoins.blogspot.com at 9:28 AM No comments:

Stamps on silk are always something special.
For my next item this is surely true.
Liechtenstein, the mini state between Switserland and Austria has a long tradition among (European) stamp collectors, as they emit high quality stamps.

The sheet of 2013, was emitted to commemorate the renovated 'city palace' of the Liechtenstein princely familly in Vienna, Austria. Together with the 'garden palace', it is owned by the princely family for over 300 years.
After it was fully renovated, both palaces are open to the public.
The overwhelming baroque style of the building, and the neo-rococo interiors are reflected in the sheetlet, issued by the Liechtenstein post.
The sheet is composed of 3 stamps, but the design runs throughout the sheetlet.
Only the 3 stamps are in full colour, with gold overprint, the board outside the stamps are in pink.


On the back side of the stamps, we see and feel the embossed printing.
The silk structure makes it feels as if one was touching the wallpaper in the grand rooms of the palace.
Truly a wonderful sheet to have in your collection. And an invitation to visit the palace in Vienna.
The sheet was issued for the reopening to the public of the city palace, and can be visited twice a month on Fridays (€ 25),  or even rented!
One hall (or should I say 'saloon' or 'parlour' can be rented from € 5500 on...)
I'll stick to the sheetlet, and dream away...

more to follow
Posted by rainbowstampsandcoins.blogspot.com at 8:44 AM No comments:

For the next post on stamps on silk, we go to Portugal.

In this sheetlet, printed on cotton, Portugal is commemorating its textile industry.

On the stamp, we see 3 parts.
First is the cotton plant (algodão in Portuguese).
Secondly we see a picture made in the late 19th -  early 20th century, where women are working in textile industry, next to the large bobbins of cotton.

On the right we see the goddess Minerva, goddess of Industry (commerce), weaving and crafts.
Although Minerva is more often depicted with a shield, the wheel also refers to commerce. 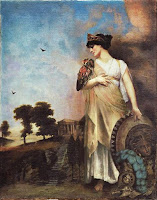 more to follow...
Posted by rainbowstampsandcoins.blogspot.com at 5:35 PM No comments:

On this third post on the current Swedish banknotes, I am presenting the second highest denomination, the 500 crowns note (€ 50)

Birgit Nilsson (M.i.&a.) was a Swedish opera singer, who was born and died on the southern province of Skåne Iän, as depicted on the map on the reverse side of the note.

The M.i.&a. behind her name stands for the Medal 'ingenio et arti' (medal of science and art).In 1973, she was honoured by the Danish Queen Margrethe II - as a 'Thank you for the music'.
Since 2009, an opera award baring her name, is given to artists with meritorious achievements in the opera scene.

On the reverse side, we see a famous brigde, the Øresundsbroen (DK), Öresundsbron (SE) - or the Oresundbrigde (EN). This bridge connects the Swedish city of Malmö with the Danish city of Copenhagen. The bridge was built between 1995 and 1999.


If you ever visit Sweden or Denmark, this remarkable landmark, is a must to cross between the two countries, and 'mamma mia', what a view.
Currently I don't have the 1000 Swedish crowns - note in my collection, but if anyone would ask me who's willing to accept one, 'I do, I do, I do'.
Posted by rainbowstampsandcoins.blogspot.com at 10:59 AM No comments: