Canada is said to be the only country in the world that everyone wants to visit.
From the Norsemen in the 10th century over the French and British colonies in the 15th century, Canada has always been in the interest of many people.
Except for the border with the United States, which is the world's longest land border, Canada has no other neighbouring countries.
It is the second-largest country by area, and the fourth-largest country by land in the world.

But is it a country?
Before I get e-mails and letters from 36 million people in Canada, (don't worry, I speak both English and French), the question is not that odd.
Canada is a sovereign state, but with no president. Technically spoken, it is a constitutional monarchy under the British trone. Not only is the Queen represented on all Canadian banknotes, also the royal anthem is still 'God save the Queen' and the Union Jack (flag of the United Kingdom (of Great Britain and Norhtern Ireland) is still the Canadian Royal Union Flag...

De facto however, Canada is as sovereign as most other countries in the world.
Despite of the die-hard royalist, most Canadians consider themselves as idependent from their European motherland.

The flag and the anthem issue are solved as well.
The anthem "O, Canada" - although composed in 1880 - was adopted in 1980. It is used as national athem on official occasions.
The flag is a different story...
From the 19th century on, the Union Jack was present in the corner of the flag of Canada,
In the renewed design of 1921, the flag did not change much.
The Maple Leaf (symbol of Canada) is in green - and the Union Jack is in the corner.
In 1957 a small change was made in the design of 1921.
This minor modification, show the Maple Leaf in red. also the harp (Norhtern Ireland) is modernised.
The flag was only in use for a couple of years.

Finally, in 1964, a competition was held, to make a design for a new Canadian flag.
One of the designs that didn't win, showed the original colours of the Union Jack (blue, white and red) and the Maple Leaf, as it appeared on the previous flags.
The winner of the competition, Colonel George F.G. Stanley had this similar flag, in only red and white. The flag is know as the Maple Leaf.

In 2015, Canada celebrated the 50th anniversary of its own flag, with a souvenir sheet, printed on silk. The image of the Maple Leaf therefore feels like a real flag.
The actual stamp is the flag itself (although hard to see) is self-adhesive. 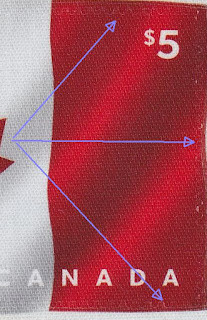 The arrows shows where the perforation of the stamp is most visible.

Once more, Canada has issued a beautiful stamp which I thankfully add to my collection of odd stamps.

This article is dedicated to John Ridsdel (1948-2016)
Posted by rainbowstampsandcoins.blogspot.com at 1:44 PM No comments: