It has been ages since I posted other items then stamps, coins or banknotes.
Quite logical if you know the site is about those things.
However, since I'm in love with Volkswagen Beetles, I made an exception for some collectibles that are sidekicks of my collection.

For the magnet lovers, check previous posts on Volkswagen, to see the other items I posted.

The 1954 magnet shows a Volkswagen Beetle 1200.
On the WWW I found the picture of the car that was used for this magnet:
Back in 1954, amost 1.000.000 Volkswagen Beetle cars were sold already.
A couple of months later, on August 6, 1955, they reached the landmark of 1 million cars.
This amount would be repeated 20 times more, as in total over 21 (!) million Beetles were produced.

Hopefully I can continue this set of magnets ...
Posted by rainbowstampsandcoins.blogspot.com at 11:55 AM No comments:

It's been a while since my last post on Volkswagen Beetle items.
And although this stamp/sheet does not have the Volkswagen as main theme, it is clearly prensent at the sheet. 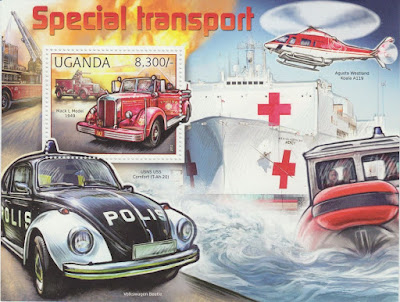 This Uganda sheet, issued in 2012, is dedicated to special means of transport.
Uganda has issued tons of stamps, sheets, and not all of them are official.
No wonder there's something strange about the sheet.

This sheet is titeled 'special transport'.  "Emergency transport" might have been a better choice for the vehicles depicted.
My eyes - of course - are more interested in the Volkswagen Beetle.
Strange is the fact that the word 'POLIS' is witten on the car.
As to my knowledge, Uganda has English and Swahili as their official languages.
Which means, you would expect 'Police' or 'Polisi' to be written on the car.
Maybe it should have been the Swahili word, but with the last I omitted ...

A bit of research however, shows that the depicted car does exist, but it has little to do with Ugangda.
"Polis" is seen on Turkish police cars and on Swedish. (also on Curaçao).
As I haven't found any Turkish Volkswagen beetles that were used by Turkish police, the only match to me is the Swedish link.
As you can see in the picture, the inspiration for this stamp design, clearly comes from the Swedish police. The details were omitted (lamp on the roof).
If you need special assistance in Uganda, don't expect the police soon to arrive. It's a long way from Sweden to Uganda.

Posted by rainbowstampsandcoins.blogspot.com at 9:01 PM No comments:

When writing the previous set of articles for this blog, I realised that there were many similar notes issued between 1905 and 1912 (but also later on) with mainly 2, 3 or 4 important signatures.
Those signatures are from the State Bank Directors.

However within those notes, a wide range of second signatures (less important for determinating the exact period of issue) makes it way more fun to make larger collection.

The State Bank Director's signatures, depending on the specific banknote, can be one of 4 maximum.
Some later notes only have 3 signature types, and some only 2.
This information can be found on the previous posts I made.

A basic collection can consist out of one note of each value.
A more advanced collection might have one note of each issued value, having one of the 2, 3 or 4 signatures.
However, we aim for the highest goal and we'll try to find a copy of each cashiers' signature as well...
Admit it, it adds a lot more fun to your collection.

The most important instrument for determinating which signature, and how many signatures there are, should be available in catalogues.
However the Standard Catalogue of Paper Money, didn't answer my questions, so I went further.

An overview of the cashiers' signatures types I found so far ...

This might take your collection to a higher level.
Who said that there is a thin line between a hobby and a mental illness, ....

Posted by rainbowstampsandcoins.blogspot.com at 2:18 AM No comments: