As a final post on the 'disputable' cancelations on the early Japanese stamps, some examples of non-postal and postal cancellations:

On the right hand side, we already see the non-postal cancel (see previous posts)
The left hand side stamp shows a cancel with a double ring.
The centre isn't empty as we see with telegraph cancels.
This usually means it's a postal cancellation


On the right hand side, again a non-postal cancel.
The first stamp shows TOK(YO) although the cancel is incomplete, and it might be a forgery, it gives the impression of being a postally used cancel.


The stamps above gives a better impression:
Left a postally used stamp, with a clear cancelation 'YOKOHAMA'
Right, the typical non-postal cancel

Finally two nice examples of postal cancels - and again the non-postal cancel next to it.

Happy hunting, if you start reviewing your (early) stamps of Japan.

Posted by rainbowstampsandcoins.blogspot.com at 10:02 PM No comments:

In the previous post, I showed some telegraph cancels on regular stamps.
Those cancels are not the only disputable cancels.
Also telephone cancels and revenue cancels were used to cancel regular stamps.
According the Michel-catalogue (and that's the best I found so far), there are 4 types of cancels to beware of.


The first type I described in my previous article.
Now some examples of the other types:
Easy to recognise cancels

The last two types are also easy to recognise, but there's one important notice:
We can easily see the date (Japanese Era) on the cancel, and yet it's not a postal cancellation.
For postal cancellations also have an indication of time (hours).
On the purple stamp it's easy to see that this indication is missing.
The blue stamp in incoplete, so we're not sure.

The same type of cancels as the those above, but now with indication of time (hours) are postal cancellations.
Important to know is that Michel and Scott gives them a value 5 times higher then the non-postal cancels. (= 1/5 of the catalogue prices)

to be continued ...
Posted by rainbowstampsandcoins.blogspot.com at 7:09 PM No comments:

I have wrote a lot on CTO stamps in the past articles.
From easy to recognise CTO cancels, over the harder ones.
This - for now - last part is about disputable cancels.

The cancels in this article are not really CTO cancels, but they are no postal cancellations either.
They are not fake, but the cancels on the stamps were not for postal use.
This means, those stamps weren't used as post stamps, or at least the cancel tells us that.
In that way, they fit the same definition as some CTO cancelled stamps...
The stamps are made unusable (cancelled) but not for postal trafic.

Let me give some examples: 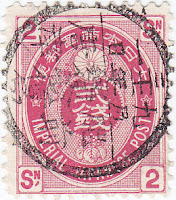 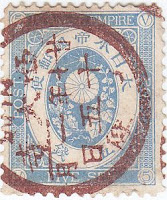 Scott catalogue mention shortly that those stamps can be found with "telegraph or telephone office cancels" and "sell at considerable lower prices then the postally used copies"...
The beauties above are such cancels.
Scott doesn't helps us further then the quotes lines above.
The French "Yvert" catalogue doesn't help us either, and even the (Japanese) Sakura catalogue fails to help me.

I had to search in the German "Michel" to find a picture of what was meant.

This might look like Japanese to most of you, and ... indeed it is.
The first cancel is a telegraph cancel.


The first type of these cancels is eay to recognise : an outer circle with japanese inscriptions, and an inner circle that remains empty.

In the picture above, we see a regular stamp (1883) with a telegrap cancel.

Posted by rainbowstampsandcoins.blogspot.com at 9:53 PM No comments: