On May 5, 1945, the Netherlands were liberated, at least partly. It was on August 15, after the capitulation of Japan, when also the former colony of the Dutch-Indies were liberated.
This date was also the end of World War II for the low countries. Now, the dutch live in peace for over 60 years. To celebrate this, and of course to commemorate the end of the second World War, the Royal Dutch Mint, emitted on behalf of the dutch Ministery of Finances, a special € 5 coin. "The Peace 'Five'" 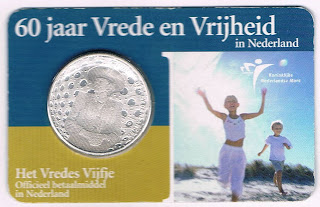 The coin was distributed in a card board holder (size of a credit card).
On the front, Queen Beatrix is depicted. 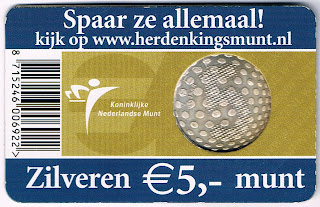 For those who are interested, the coin was also made in Proof-quality, both in silver and gold.
Face value is € 5 (silver) and € 10 gold - but prices of course depend on market values of silver and gold.

This coin is the 7th € 5 coin that was issued by the Royal Dutch Mint.

Posted by rainbowstampsandcoins.blogspot.com at 5:50 PM