After years and years of 'paper' banknotes, a new type of banknotes are gaining influence.
The paper isn't paper anymore, but polymer.
The correct name of the texture is Biaxially-oriented polypropylene (BOPP).
The use of this type of polymer allows other security printing features that were not possible with paper banknotes.
As this first set of articles is only dealing with the papertype, I will come to those other features later.

Polymere banknotes were used for the first time, in Australia in 1988.
The benefit is ofcourse the enhanced durability of the notes, and the difficulties of counterfeiting them.

Some of the countries that have issued polymer banknotes so far : 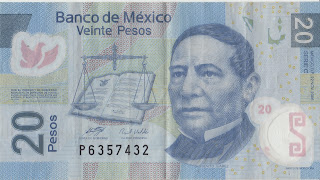 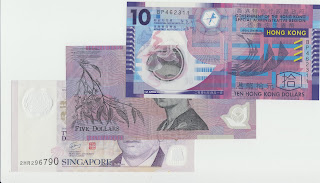 To be continued...
Posted by rainbowstampsandcoins.blogspot.com at 6:24 PM 1 comment:

A simple dry stamp or a less complicated watermark are not enough to prevent forgers to counterfeit banknotes.
When it comes to security marks, certain solutions were found in the type of paper that was used for producing the notes.
Later on, I'll come back on the security marks that can be found in the printing process.
More basic security is in the paper itself.

The old Assignats in my previous post were made out of very cheap, common paper.
As soon as the banknote got folded too many times, it was doomed to break in two.
The ink didn't hold too well either, and not to mention the fact that a note that got wet, was bound for (self)destruction.

Ok, we're not supposed to go swimming with our banknotes (unless you're Dagobert Duck), but in rainy areas (like most parts of Europe), water was, is and will always be an enemy of the paper banknotes.
The use of certain plastics was not known in the beginning, but cotton offered a reliable solution at that time.


Where normal paper is made of wood pulp or recycled paper, banknote paper is an end product of the cotton plant. The seed fluff from the cotton fibers are stirred untill they loosen.

The firsty belgian banknotes were printed on wood free paper.
To lower the costs, for normal paper, we can use old paper in stead of wood.
For banknotes, old cotton rags were used. They were pressed and grinded but that process was an art on its own. The shorter the fibers, the more fragile the paper was. But longer fibers resulted in an unclear watermark.
In order to make the paper stronger again, hemp and linen was added.


The security feature that I wanted to show today, has in fact nothing much to do with printing yet, (as this will follow in the future), but with the process of the paper making.

When the paper is made, additional fibers can be added.
This is impossible to copy, as it is part of the paper itself.
To make a reliable copy, you should have to used paper with fibers itself.

German Empire banknotes are fine examples of the use of coloured fibers in their banknotes.

It's a technique that is still used, not only for banknotes, but also for stamps.

Posted by rainbowstampsandcoins.blogspot.com at 10:24 PM No comments:

After my previous post, I realised there's so much to say about the Assignats .... that I 'm offering you all a second post on this item.
I know you won't mind.

Let 's look at the specific marks on this note, and the security features that were used. 4. A signature... there are more then 100 different people who signed the Assignats. Very difficult to find out if an Assignat was counterfeited or not.

Around 1800 when Napoleon came to power as First Consul, the assignats became worthless, the amount issued far exceded the underlying value.

Napoleon became Emperor in 1802, but after he was defeated at Waterloo, the Kingdom was restored and King Louis XVIII took power in 1815.

To be continued
Posted by rainbowstampsandcoins.blogspot.com at 11:09 PM No comments:

Modern banknotes are a true 'Fundgrübe' (treasury) for those who want to discover all new printing techniques, and a real playground for those who develop those new techniques.

But first things first.
As techniques are improving, it means the first banknotes didn't have security features or they appeared not to be 'secure' enough.

In this first part, I'll start with very old banknotes. Not the oldest ones, as banknotes are described since the 14th century. Still we're going back to the 18th century. Some very old, but relatively 'cheap' banknotes are the french Assignats.


Assignats were issued by the new government of France, the 'Assemblé Nationale', after the French Revolution of 1789. They bare signatures of  hundreds of different people.
These Assignats were based on the confiscated belongings (domaines nationaux) of the church, the noblemen, King Louis XVI and his family, and everybody else who ended up under the guillotine for whatever reason.

I will talk about this note more in detail in my next post.
First, as the title said, I need to say something about the security marks.
Well there aren't many :-)

The assignats were made of common bookpape, the only 'security marks' are a watermark and one or two drystamps.

1. There is a certain watermark visible as can be seen on this picture I found on eBay (thus this is not a banknote I have!)


2. The second security mark that can be found is a drystamp

The Assignats however were counterfeited in huge amounts, and alone in Paris 200 counterfeiters ended up under the Guillotine, nowadays counterfeited assignats are very rare and worth more then the original ones.

more to follow !
Posted by rainbowstampsandcoins.blogspot.com at 9:15 PM No comments:

All stamps, shown in the two blocks in my previous posts, were also issued as single stamps.
There are thus, two variations of each stamp.

There's a small difference in colour between the two issues, but for some of the stamps, it's very difficult to see.

The best way to see the difference, is when the border of the stamp is still attached.

The single stamps don't have the gold print above or beneath the stamps.
In stead of that, you'll see "ZODIAC (I) or (II)

Posted by rainbowstampsandcoins.blogspot.com at 3:28 PM 2 comments:

In my previous post, I showed the first sheet of Romania, with 6 zodiac sign stamps.
If there's a 'first' sheet, there has to be a second one of course.

Again, half of the hemisphere is depicted on the sheet, and we'll see the zodiac signs that were on the stamps of the first sheet.

If we put both sheets on top of eachother, we can complete the whole image :


Posted by rainbowstampsandcoins.blogspot.com at 3:08 PM No comments: