The country, litteraly on the equator, issued 4 stamps between 1865 and 1872, showing the coat of arms of this South American republic.

The quality of my first Ecuadorian, is not too good (also the paper is quite thin), but then the catalogue value of a good copy is hardly € 20 / $ 25.
Among all 1st issues, (and certainly among the ones of the 19th century) certainly not an expensive stamp.
Posted by rainbowstampsandcoins.blogspot.com at 11:54 PM No comments:

From the 1 dollar commemorative coin, some errors and varieties exists, and I don't want to keep them away from you... (altough NOT in my collection)

Turning the coin horizontally, the image of the goose and the Queen are upright.
This kind of minting is called 'medal orientation'.

For a medal to display properly, even if it flips over, when it is tagged to a uniform, the reverse needs to be aligned so that the top of the reverse shares the same position as the top of the obverse. This alignment is called medallic orientation. The opposite situation is seen in some coins, e.g. coins of the United States - but not those of the United Kingdom. In this case, the coin must be flipped about its horizontal axis in order to see the other side the correct way up. In other words, the image on one face of the coin is upside-down relative to the other. For this reason, 'coin orientation' is used in the United States to express the opposite of 'medal orientation'.


Same coin as above, but with different orientation of one of the sides. Very very rare !!!

The diving or declining gooze, is a variation of the first coin (medal orientation).Catalogue value rises up to 5 to 10 times the value of the 'normal' coin. Rather rare.

The coin looks terrible, but this has much to do with the fact that it was struck twice.
As we see a goose with two necks.

This error is worth easily 10 to 20 times the value of a regular coin of the same quality. - Very rare.

Posted by rainbowstampsandcoins.blogspot.com at 2:23 PM No comments:

The highest values of the 1967 centennial coins are the 50 cent and the dollar coin.
All credits for the coloured pictures go to Patrick Glassford.
50 cent

"The wolf, unfortunately no longer common, is here symbolic of the vastness and loneliness of Canada, and thus of our tradition and to a degree, of our present condition. Yet the wolf is not a pathetic creature."... said David A. Coleville in 1965

The noble wolf has made a bit of comeback in Canada since the 50 cent piece was released. The province of Ontario repealed its bounty on wolves in 1973. Quebec still has towns that occasionally offer a bounty, and British Columbia uses poison or traps to kill wolves who endanger livestock. There is not ONE recorded instance of a wolf killing a human.( although movies and books would have you believe different) The howling of a wolf or their pack is an eerie yet spectacular sound.(I have heard it in the bush) They are quite intelligent animals. The regular 50 cent piece would have had a Canadian Coat of Arms on it.

David A. Colville said about the dollar coin he designed :
"The Canada goose seems appropriate for the dollar since it is one of our most majestic creatures and is particularly Canadian. There are other associations with traveling over great spaces, and a kind of serene dynamic quality in this bird."


The Canada Goose, perhaps Canadas most famous bird, can travel more than 600 miles in one day flying in their famous V-shape. The 1967 dollar coin was the last true 'Silver Dollar' as they were not made of any silver content after that year.

... to be continued ...
Posted by rainbowstampsandcoins.blogspot.com at 7:16 PM No comments:

When artist David A. Colville designed the back side of the 6 centennial coins of Canada, he clearly knew what he had in mind. For each of the 6 designs, he chose an animal that stood symbol for the Canadians and their society.

Although I have the shown coins in my collection, I used the detailed (and coloured) pictures of the animals from someone else. All credits for the pictures go to Patrick Glassford.

Commemorative coins rarely have a low face value, as they usually cost more to mint, than the actual face value.
The design described by the artist himself : "For this I wished to use a very common bird, but one with symbolic overtones. I selected the dove (rock dove) -very common, in cities as well as in the country, as the pigeon, and having associations with spiritual values and also with peace."

The 5 cent or nickel features the rabbit, a common creature in Canada. Beatrix Potter did the Peter Rabbit children's books. The original design was a spruce tree but it turned out too complicated so it became a rabbit design.

According the artist : "The rabbit (varying hare) is common, much loved by children, perhaps because of it vulnerability. It survives by alertness and speed, and is symbolically connected to the ideas of fertility, new life and promise-it is a future, or united, animal."

The Canadian Mint wanted the fish to be changed to a salmon, but David A. Colville stuck to his guns and stayed with his mackerel. The ten cent piece with a few exceptions over the years usually shows the Nova Scotia Schooner 'Bluenose'.

"Being the smallest coin, this requires a simple and unambiguous image. I used the mackerel, one of the most beautiful and streamlined fish, common on both coasts. The fish has ancient religious implications; I think of it as symbol of continuity."... David A. Coleville.


25 cent
Before you send letters stating that it's really a cougar/wolf/lynx/wildcat/bobcat/etc. Even some reputable coin dealers' books and websites have it listed as one or other of the above. Charlton Standard Catalogue of Canadian Coins lists it as a "Cougar" on page 96.
But this is what the designer self said :

"The wildcat (bobcat) seemed appropriate for this coin, which is large enough for the subtle shape of this common, though rarely seen, animal. It is expressive of a certain intelligent independence and a capacity for formidable action."

... to be continued ...
Posted by rainbowstampsandcoins.blogspot.com at 9:35 PM 1 comment:

There was a time, when coins were used to pay for goods or services. They were representing a certain value in gold or silver and the owner could exchange the coin for things or services, as long as a bank was covering the value of the coin.

Coins are not really intened to be collected, as then you can't "exchange" the token for what you need. However as banks started to emit commemorative coins, people started to keep those coins apart and collecting was born.

From the 60's of the 20th Century on, coin collecting had become a widespread phenomenon, in such an amount, that banks started to have problems minting enough coins to keep u with the demand.
As regular circulation coins also contained silver, the demand was becoming too high.
In 1967 Canada issued its last silver coin dollar, by 1968 all Canadian dollars were made out of 100% nickel, and at the same time, the dollar coins were reduced in size too.

This article will deal with the last set of silver commemorative coins (so not only the dollar-coin) that was issued in Canada in 1967.

In 1967, Canada celebrated the centennial of the Confederation.
A set of 6 coins was issued, from 1 cent to 1 Canadian Dollar. 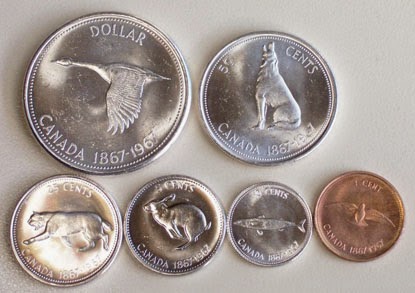 The back side of each coin is quite simple, Queen Elisabeth II, head of state of Canada. 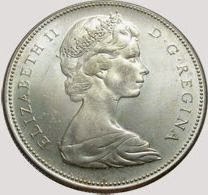 For the front side of the coins, a competition was opened in 1964, by the the Minister of Finance, Walter L. Gordon. The competition open to artists, sculptors and designers residing in Canada or to Canadians living abroad would be held for the submission of coinage designs. A $2,500.00 First Prize was offered for the winning designs in each of the six coinage denominations (One Cent, Five Cents, Ten Cents, Twenty-Five Cents, Fifty Cents and Silver Dollar).

The competition ended on March 31, 1965 and the over-all winner was the 44 years old artist David Alexander Colville, born on 24 Aug 1920 in Toronto.

Colville was still a young man when in 1939, WWII erupted, he enlisted in the Canadian Army in 1942 upon graduation from Mount Allison University. Serving in Northwestern Europe with the 3rd Canadian Division, he was made an official war artist in 1944, He landed in Southern France, saw action in Nijmegen during Market Garden (where his unit relieved the 82nd Airborne) and continued into Germany, where he saw first hand the horror of the Bergen Belsen concentration camp.

... to be continued ...
Posted by rainbowstampsandcoins.blogspot.com at 6:35 PM No comments:

In several European countries, recently princes have enherited the thrones of their fathers.
Moneywise, lost of coins therefore, have new designs, with the new monarch depicted.

Queen Beatrix appears on all coins looking to the left, so King Willem-Alexander is looking the opposite way.

The first new coin that was issued, is the regular circulation coin.

On the left we see Queen Beatrix, facing the left, on the right, King Willem-Alexander is facing right.
The design of the king's head is also a more modern design.


Two commemorative coins were also emitted, both with the two monarchs.
On the left coin, (the Beatrix-coin) we see the Queen in the front (facing left as usual) en behind her
the former prince Willem-Alexander.

It's a nice tribute to the countrywide respected Queen Beatrix, and a nice way to express the change of power in the Netherlands.
Posted by rainbowstampsandcoins.blogspot.com at 5:08 PM No comments:

What does a swiss landscape has in common with a zodiac sign?

The zodiac sign in the corner of the stamp has nothing to do with the actual image on the stamp.
Depicted are views of cities of landscapes in Switserland.
1,00 CHF : view on the old city of Bern - Aquarius
1,10 CHF : city of Nax, near Sion - Pisces
1,20 CHF : Graustok - Aries
1,50 CHF : Cathedral of Basel - Taurus
1,60 CHF : Schönengrund in Appenzell - Gemini

A year later, a second set was issued, this time with 3 stamps

the 2 CHF stamp is the special one ...
Swis stamps are know for their good quality, but in this case, the designer, or at least the one who was responsible for the layout of the stamp, must have had too much Appenzeller liquor, or Fendant wine, as the image on the stamp is mirrored compared to reality...

The 'wrong' stamp was not redrawn, but replaced by another view in 1984

The 1984 issue of the Virgo stamp, shows us 'Lac Noir / Schwarzsee' near Zermatt.


Again, the views on the cities, and the zodiac signs have nothing in common, this happens often in countries like Equatorial Guinea, Togo, Mozambique ... where we see logos of WWF, Rotary or scouting on hundreds of stamps. A bad way to make collectors buy stamps that are 99% off topic, but that appear in 'specialised' catalogues on WWF or scouting for example.

Not the bes issue of the Swiss, but at least again something to write about.
Posted by rainbowstampsandcoins.blogspot.com at 2:41 PM No comments: