In the previous post on Belgian Emergency notes from Bruges, I mentionned 4 bodies were responsible for issuing emergency currency.
3 of them were local committees, the fourth one, the most important one, was the city of Bruges itself. In 1914 they issued a set of two notes with centimes denomination, and 6 notes with higher values (starting from 1 frank).

The Mayor of Bruges at that time, was Duke Amedeus Karel Lodewijk Visart de Bocaré.
He was mayor til 1916, when he was deposed by the Germans, in favour of baron Ernest Marie Joseph Martin Michel van Caloen.
Baron van Caloen was member of the committee of honour of the Bruges' Esperanto Association.
The picture below was taken on the occasion of the second Esperanto Congress, held in Bruges in 1910.
Both mayors (the real mayor and the mayor-ad-interim) have their signatures on the emergency notes of 1914 (although the van Caloen's signature dated from 1916).

The two emergency banknotes, issued by the Bruges' city board are 5 centimes and 25 centimes.

First of all, the 5 centimes note. (VIJF CENTIEMEN : as Bruges is a Dutch speaking city)
The 'Visart' signature, appears on both notes, the 'van Caloen' signature can only be found on the 25 centimes' note.
The second note is a 25 centimes note.
Here there are 2 versions of the note. One is similar to the 5 centimes note. (not in my collection (yet)).
The second version is with the symbol of Bruges (a bear) on the left hand side of the note.
Again the text is in Dutch, as that is the local language in Bruges.﻿﻿
The catalogue mentions a signature : E. van Calve - where it has to be E. van Caloen.
Both notes have a catalogue value of more or less € 10 - depending on the quality of the note, it can be less too. The 25 centimes (as in the picture) is slightly worth more.

to be continued ...
Posted by rainbowstampsandcoins.blogspot.com at 11:03 AM No comments:

Let's start at the very beginning, a very good place to start.
When you read you begin with A, B, C, when you sing you begin with do, re, mi, ...
and when you talk about banknotes... you start with what you have.

Since I was born in Belgium, in the beautiful city of Bruges (yes from the movie "In Bruges"), I start my articles on Emergency Currency in that city.
Belgium has now 10 provinces, (9 during the 1st WW) and Bruges is the capital city of West-Flanders. It is now the world most visited place, compared to the number of its citizens. For each citizen, there are 15 (!) tourists.
As Bruges is a larger city in Belgium, a lot of people - also in 1914 - were living in the city or were related to the city. A lot of people from the surrounding areas were also depending on the welfare of the supporting organisations in Bruges.

In general we can say that the smaller the city, the more valuable the notes are.
High value notes are less used, so they hit higher prices in the catalogues too.
And finally the quality of the notes (as they are 100 years old) will be of influence of the value too.
more to follow ...
Posted by rainbowstampsandcoins.blogspot.com at 3:13 PM No comments:

In order to have an idea of the value of some emergency notes, and of currency in 1914 in general, we need to know what the average costs of basic products were, as well as the income of a henchman, a factory worker, an independent worker ...

Secondly it's important to know the prices of most articles.

Shortly before the start of the First World War, sole (fish) was sold around 180-200 francs per lot. Turbot (fish) was sold at 3,50 francs a kilogam.
On the day the first World War started in Belgium, sole went down to 36 franks per lot, turbot to 0.20 franks a kilogram... This resulted in tons of rotting fish in the belgian harbour of Ostend.
On the other hand, that same day, potatoes went from 1 franc per 10 kg in the morning, to 1.6 francs in the evening.

In this table, a short overview of the prices (in Belgian francs) during the First World War:
It is clear that the income of most people in Belgium - and most countries affected by the First World War, was insufficient to survive.
Thanks to the different commitees, and social organisations, this income was raised thanks to the emergency notes (coupons) that were distributed.
One of those committees at a certain moment gave support to people as follows :
3 francs for an adult man - 1.50 francs for an adult woman and 0.50 francs per child.
I could not find out if this was per week or per month.

To give at least one meal per day to its citizens, many cities organised free soup distribution among their citizens.  This was for many the one and only meal they had per day.
﻿
to be continued ....
Posted by rainbowstampsandcoins.blogspot.com at 8:53 AM No comments:

When talking about 'Notgeld' or 'Emergency Money', you might think that this is a typical phenomenon for Germany. When googling "Notgeld", you will encounter the fancy German notes first.
It wouldn't be me, if I wouldn't start with another country of course.
During the first World War, Belgian lacked coins for daily use. The war industry needed metals in all kind of ways. Around 600 cities and city boards, as well as hundreds of welfare organisations, agreed on producing 'emergency currency'. Paper or cardboard was used, and in some cases also (cheap) metals.
In the beginning this 'money' was ment to pay out soldiers, to pay loans of city workers, suppliers of the city... But later on, it was accepted to cope with the lack of coins for daily use. Often, those coins or paper coins/tokens, were restricted in use. One could buy clothes, or coal, but not food... or the other way around.
Along with city boards, a lot of social organisations, like the "national committee for aid and nutrition", issued similar coupons.
Even some factories issued coupons to pay out their employees. Many of those coupons were to be exchanged in stores owned by the same factory...

In much cases, the coupons or emergency currency was only valid within the city that issued the notes. Often there was a date printed on the notes, which told the owner on what day the note could be exchanged for "real" money again, or in some cases, to be exchanged for another coupon.

As a guideline to the Belgian 'emergency issues', a highly recommended catalogue is available.
Prices varie between € 40 and € 90.

to be continued ...
Posted by rainbowstampsandcoins.blogspot.com at 7:20 PM No comments:

There is so much to say about Emergency Money - and in extention about replacement coupons - that a bit of a guidline might be useful.

To make a difference with 'banknotes', let's state that banknotes are issued by the National Bank of a country (or a group of countries), notes that are issued by the National Mint of a certain country, or by a government ruling a certain area on a certain moment.
In this set of articles on Emergency (and replacement money), we talk about notes/coins and coupons that are issued by private organisations, non-profit organisations, cities, towns, ... in order
a) to replace coins or notes because there's a shortage of official coins/notes 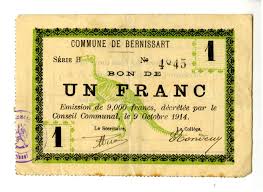 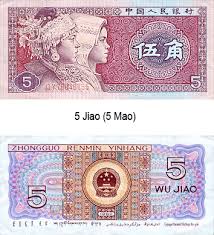 e) to replace national currency to give a number of people access to other products (like for military, foreigners, ....) 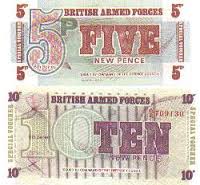 f) to pay employees in a way that they were forced to use their 'money' to spend in shops owned by the company that issued the 'money' - Nazi concentration camp 'money' is a similar type of money. 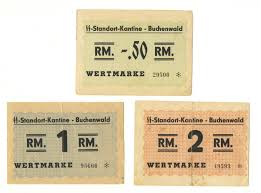 I might have forgotten some categories, but at least we're more or less clear about the difference with bank notes.

Not in this category are the French, British, Russian 'assignats' - although they were replacing silver and gold coins as well. They were a stage between the use of gold/silver towards the use of banknotes as a general way of making payments.
Besides that, they are in all 'banknote' catalogues, so they can be considered as 'banknotes'. 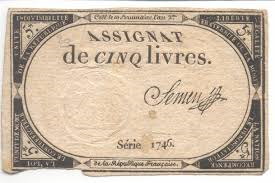 Tokens issued on fancy fair, casinos and in certain theme parks (Disneyland) are other types of 'replacement money' and are left out of this list too.

In what follows, I will try to pay attention to the following themes :


check previous items and more to follow ....
contributions are welcome
Posted by rainbowstampsandcoins.blogspot.com at 9:42 PM No comments:

From the beginning of the first world war, a shortage of metals forced a lot of countries to redraw their coins out of circulation. Silver coins were too valuable but also other metals were needed for war industry. 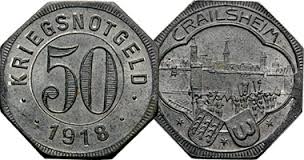 To cope with the demand of small denominations, lots of cities started to issue paper notes to replace the needed coins - some coins were issued in zinc or other cheap metals, and even other material was used, linen, silk or velvet, porcelain, leather, ... you name it.
This happened in many countries, Belgium, France, Germany, Austria ... 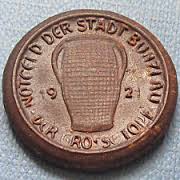 The first issues, in Belgium, France, ... were issued by different authorities, cities, non-profit organisations, employment offices, social organisations, ... in order to supply funds for the people suffering from the economical situation during the first world war.
This means that the issued notes were not only as a replacement for real 'money', sometimes they were also coupons that could be exchanged for grain, bread, meat, fish, ...
In this vieuw, we can add a whole category or chinese food coupons to this already elaborate theme.
And China is/was not the only country issuing food coupons. 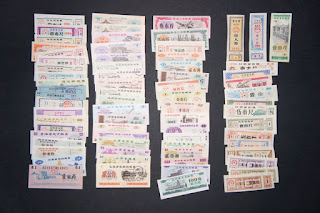 Many of later notes (especially in Germany) became very fashionable and were issued for reasons beyond the need of real 'money'. They can be considered in a way as cinderellas.
These notes are known as 'Serien Scheine" - some special series, issued by a number of cities are know as "Reutergeld". 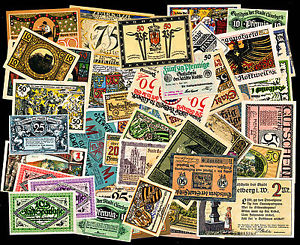 Later issues (for example in the 90's of previous century) were issued mainly to fight inflation in areas that suffered from war, like Bosnia Hezegovina. Here we find mostly paper notes.

In order not to make this introduction too complicated, I will leave it here.
There are thousands and thousands of different notes and coins.
Hopefully i'll find a way to make it understandable for you all....

(contributions are welcome!)
to be continued...
Posted by rainbowstampsandcoins.blogspot.com at 8:36 PM No comments: