When I started posting hexagonal stamps (and even earlier, pentagonal stamps, or even square stamps), I never had the intention to post only regular hexagons.
However, as that is a natural shape, ask the bees, it's also the most common shape when it comes to odd geometrical stamps.

And of course, the reason why I write this, is of course because today I'm presenting a non-regular hexagonal stamp.


This is one of the most odd shaped stamps I have in my collection.
Later on I will mention the odd stamps with free shapes, but this on, surely is very special.

The stamp was isssued in a small sheetlet, and as far as I know, it was also only emitted as a sheetlet.

The following sheet, is a special one.
Well in a way, they are all special of course, but here, I didn't know whether to label it under 'odd shaped sheets' or, 'zodiac signs'.
This Indonesian sheet, has it both.

As you can see in the title, I have chosen to label it under the zodiac signs.
That is what the stamp on the sheet is about.

It's time to continue with the current banknotes of Bangladesh.

As on all Bengali notes, we see the portrait of Sheik Mujibur Rhaman, first president of Bangladesh.
In the middle of the note, we also see the National Martyr's Monument (Jatiyo Smriti Soudho).

On the 50 taka note, we see two men drawn by two buffalos (on a field)

On the back of the 100 taka notes, we see a mosque.
Both notes are identical in design (except for the year 2011 and 2012) - but the first one is blue on pink, the second one is monochrome blue. 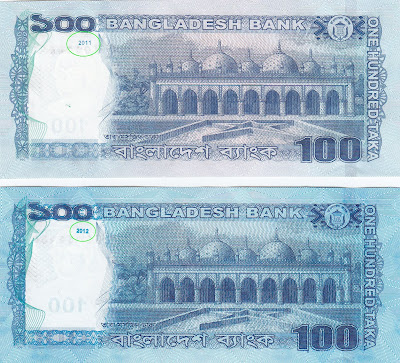 Further on, from the 20 taka notes on, upwards, another symbol is added :

Posted by rainbowstampsandcoins.blogspot.com at 1:52 PM No comments: