Liberia isn't the first country that pops my mind when it comes to Volkswagen Beetle.
However, Liberia is a country that pops my mind when it comes to lots and lots of stamps, in order to get funds.
In that perspect, it's not my favourite country, but the stamps and sheets that were emitted by Liberian post are very very nice.
I agree, it's a way of ripping of the theme collector (such as me), but on the other hand, the stamps aren 't bogus issues, so they fit into my ('any') collection.
Of course the main reason why I got this set, of course, was because of the Volkswagen Beetle stamp.
The set has actually 2 subsets with each a different style. The only common thing on the issue, is the theme: ancient cars.
On one of the sets, a 1950 Volkswagen Beetle is depicted. In the background the VW-logo is shown. 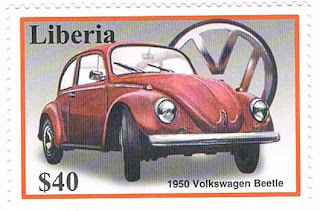 On top of this beautiful stamp, a small souvenirsheet was emitted as well.
Here we find a 1979 Convertible Volkswagen Beetle. 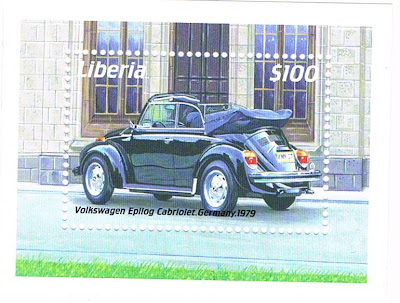 The design shows the Convertible Beetle from the side. Funny detail is the licence plate of the car, that starts with VW.The souvenir sheet is also the key value of the set.

Posted by rainbowstampsandcoins.blogspot.com at 7:30 PM No comments:

The Sovereign Military Hospitaller Order of Saint John of Jerusalem of Rhodes and of Malta (Italian: Sovrano Militare Ordine Ospedaliero di San Giovanni di Gerusalemme di Rodi e di Malta), also known as the Sovereign Military Order of Malta (SMOM), is a Roman Catholic lay religious order, traditionally of military, chivalrous, noble nature. It is the world's oldest surviving order of chivalry. The Sovereign Military Order of Malta is headquartered in Rome, Italy, and is widely considered a sovereign subject of international law.
SMOM is the modern continuation of the original medieval order of Saint John of Jerusalem, known as the Knights Hospitaller, a group founded in Jerusalem about 1050 as an Amalfitan hospital to provide care for poor and sick pilgrims to the Holy Land. After the conquest of Jerusalem in 1099 during the First Crusade, it became a military order under its own charter. Following the loss of Christian held territories of the Holy Land to Muslims, the Order operated from Rhodes (1310–1523), and later from Malta (1530–1798), over which it was sovereign.
Although this state came to an end with the ejection of the Order from Malta by Napoleon, the Order as such survived. It retains its claims of sovereignty under international law and has been granted permanent observer status at the United Nations.

However, unlike the Holy See, which is sovereign over Vatican City, SMOM has had no sovereign territory (other than Fort St Angelo in Malta and a few properties in Italy with extraterritoriality) since the loss of the island of Malta in 1798. The United Nations does not classify it as a "non-member state" but as one of the "entities and intergovernmental organizations having received a standing invitation to participate as observers."  For internet identification, the SMOM has neither sought nor been granted a top-level domain, while Vatican City uses its own domain (.va).

The Order has established diplomatic relations with 104 sovereign states.
The SMOM coins are appreciated more for their subject matter than for their use as currency; SMOM postage stamps, however, have been gaining acceptances among Universal Postal Union member nations.
The SMOM began issuing euro-denominated postage stamps in 2005, although the scudo remains the official currency of the SMOM.
Before : 1 Scudo = 12 Tari = 240 Grani (1 Scudo = 0,24 Euro).
Also in 2005, the Italian post agreed with the SMOM to deliver internationally most classes of mail other than registered, insured, and special-delivery mail; additionally 56 countries recognize SMOM stamps for franking purposes, including such as Canada and Mongolia that don't have diplomatic relations with the Order.
This means that the stamps of SMOS really are used, but the SMOM is not a member of UPU

Are stamps of the SMOM bogus or not ?
If you consider being part of UPU to determinate if a stamp is a real or fake, then SMOM stamps should be considered as bogus (cinderellas).
But if you consider stamps that are accepted by many states (56 is quite a lot) for postal use, then you can collect them with the knowledge you're collecting real stamps. 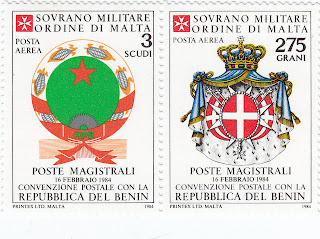 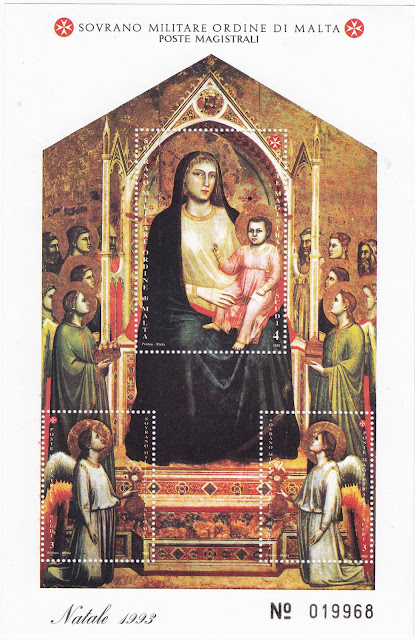 Posted by rainbowstampsandcoins.blogspot.com at 10:17 PM No comments:

In 1957, an international philatelic exposition was held in Israel.
For that occasion, a sheetlet was issued on the theme of zodiac signs.

On the side of the sheet, there are 4 tabs, each belonging to one stamp.
A closer look to the centre of the sheet we'll see that the square in the middle is in fact a combination of 4 unperforated triangular stamps.
Unperforated isn't the right word, in fact the stamps are line pierced (percé en lines) which makes it easy to remove them out of the sheetlet.

Posted by rainbowstampsandcoins.blogspot.com at 10:14 PM No comments:

Saint Kilda, who was Saint Kilda... In fact no one ever was saint Kilda, since that person never existed.
And yet, there are stamps of 'saint Kilda' ...
A bogus issue once more, and once more we have to go to the UK, Scotland in particular.
Saint Kilda does exist, it's an archipelago in the North West of Scotland. 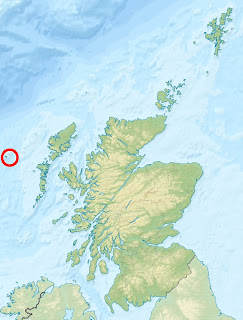 The largest island is Hirta, whose sea cliffs are the highest in the United Kingdom. The islands are administratively a part of the Comhairle nan Eilean Siar local authority area. St Kilda was permanently inhabited for at least two millennia, its population probably never exceeding 180 (and certainly no more than 100 after 1851). The entire population was evacuated from Hirta (the only inhabited island) in 1930. Currently, the only year-round residents are defence personnel although a variety of conservation workers, volunteers and scientists spend time there in the summer months.

The name of St Kilda might come from the old Nordic language :  sunt kelda (sweet spa)
Stamps were issued by the Post Office depicting St. Kilda in 1986 and 2004.
Funny thing, since the sheetlet I got in my collection was cancelled in December 1969).

St Kilda was also commemorated on a new series of banknotes issued by the Clydesdale Bank in 2009. 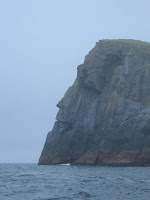 Posted by rainbowstampsandcoins.blogspot.com at 11:45 PM No comments:

It took me a couple of days to go through my stock of 'standing lion' stamps of Sweden.
At least, after I got a specialised catalogue, before, I had, "one of each", like most collectors.
Now I have "one of each" again, yet there are double as much as before.

Some help on determinating the 10 öre 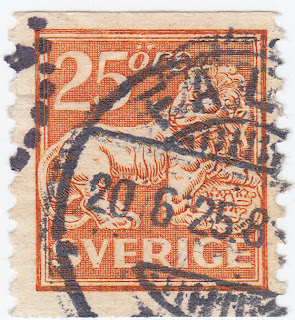 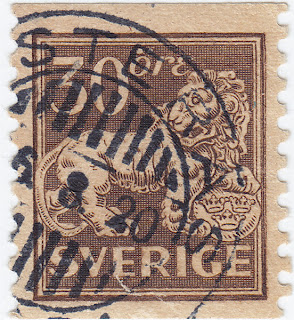 Posted by rainbowstampsandcoins.blogspot.com at 11:13 AM No comments:

From 1920 on, a stamp with a standin lion (stående lejon) was used in several emissions.
Everyone who has a stockbook with swedish stamps will recognise them immediatly.
The stamps look quite simple, and come in 2 basic versions for the 5 öre (orange and green); 2 versions of the 10 öre (green and purple), a 25 öre in orange and again 2 versions of a 30 öre (brown and purple).
Untill I took a specialised catalogue, that kept me busy for days and days :-)

Let's start with the 5 öre green

There are 2 types of that lion, they can be sorted out easily for mint versions, with cancelled stamps it all depends on the place and the heaviness of the cancellation.


In the leg of the lion, there are 4 lines, the bottom line is longer then the one above.


the two types are the same as in the green version :

there are less subtypes for this issue

In type 1, you will only find a coil stamp (perf. 10), there's a version without and with watermark, and both are on tainted paper.

Posted by rainbowstampsandcoins.blogspot.com at 11:25 PM No comments:

This is a mayor update of an earlier post, which I removed now,
it contains all German states, Local Issues (no private issues, as mentionned in Michel-Spezial)


Every collector has a 'system' he or she uses.
And collecting should not be difficult.
One puts all stamps in a certain order. Whether it's chronologically or by theme.
I don't know anyone who sort his collection alphabetically or by colour. (However, that's a possibility too).

Catalogues are a very useful tool to help organising your collection.
Unfortunatly, a stamp will probably be number 1 in most catalogues, when one comes to number '100', all catalogues suddenly show another item as the 100th stamp.

Some catalogues include airmailstamps to the 'regular' numbering, others include 'semi-postals', ... other catalogues don't.
It's of course a huge work to give listings with all catalogue numbers and the stamps they are referring to.

Good collectors' software should give the possibility to add a couple of numbers in addition to the numbering system that is used in your country.
Before starting to sort out a certain country, i always try to get a couple of catalogues and, if available also the locally used one. Since this is mostly the best reference for starting with.

Unfortunatly, I'm not only collecting 'one' country, or 'one' theme, so I need a more higher level of catalogue to start with. And since there was no available, I had to make one myself.

I started with a list of 'countries'.
Then I found out, that there are stamps, but without related 'existing' country.
Such as the former German States. They belong somehow to Germany, but ain't Germany...

So I came up with a list of hundreds and hundreds countries, territories, places, where stamps are or were issued. Some recognised by others, some not.

Because this list is SOOOOO long, I splitted it, in order to share it.
The names are in Dutch, since that's my mothertongue, but it shouldn't be too hard to find out what country is ment.
Maybe there will be discussion about a number of countries that I put under 'asia' and can/could be considered as european countries, but in general, I believe to have made a correct listing. (Got help from Wikipedia and other Internet recources). 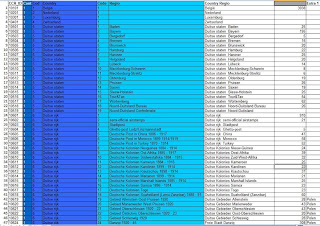 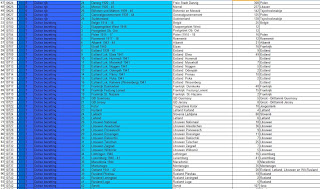 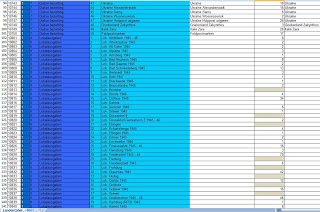 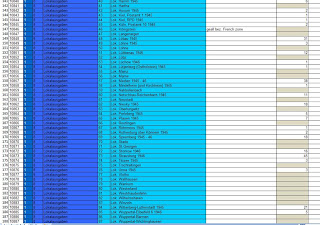 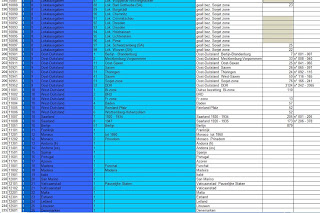 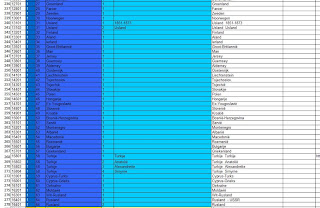 It didn't fit into one print screen, so you have 6.

In column 1 the general numbering : (0)1 is for Europe;  I had to start somewhere, and since I live here, it was the most logic choice.
second set of numbers 01 to 64 are the different states
last set of numbers are the regions, sub regions, and so on. They start with 01 when needed and can go on until needed.
This results in a country code for each region/country... I could find.
The list gives opportunities to add regions if necessary.

The colour also refers to my albums : all european stamps are therefor in BLUE albums
Posted by rainbowstampsandcoins.blogspot.com at 7:50 PM 2 comments: