A very nice sheet was issued only recently by the postal services of Luxemburg.
The Vichten mosaic depicts the ancient Greek muses. It used to adorn the reception hall of a Roman villa in Vichten but can now be seen in Luxembourg's National Museum of History and Art.

Dating from around 240 A.D., the mosaic of Vichten, which has an area of 61.3 m2 and is in an excellent state of preservation, shows in its main area the mythological and literary subject of the nine Muses, daughters of the supreme God, Zeus, and of the goddess of memory, Mnémosyne.

The Muses, defined around 700 BC by the Greek author Hésiode:

The eight « exterior » Muses are oriented on an axis towards the middle of the central medallion. The depiction of the clothing and other attributes of the different personalities, identified by latin inscriptions included above each medallion, is very detailed.
Two by two, they are joined on one octagonal stamp.
The central stamp is not octagonal.

This supberb mosaic used to adorn the reception hall of a Roman villa in Vichten and was rediscovered in 1995 on the site of a new agricultural operation in Vichten. Archaelogical resarch found the foundations of one of the most remarkable Roman villas ever discovered in the Grand Duchy of Luxembourg.
After it's discovery it was carfully removed and it can now be seen in Luxembourg's National Museum of History and Art.

Posted by rainbowstampsandcoins.blogspot.com at 11:19 AM No comments:

In the beginning of December, Belgian and Dutch children are looking forward on the visit of Saint Nicolas.  (also parts of northern France, Luxemburg, Germany , Switserland, Austria and even parts of Italy are familiar with 'Santa').

The 'Sinterklaasfeest' celebrates the name day, 6 December, of Saint Nicholas (270–343), patron saint of children. Saint Nicholas was a Greek bishop of Myra in present-day Turkey. In 1087, half of his relics were furtively transported to Bari, in southeastern Italy; for this reason, he is also known as Nikolaos of Bari. Bari later formed part of the Spanish Kingdom of Naples, because it was previously conquered in 1442 by Alfonso V of Aragon. The city thus became part of the Kingdom of Aragon and later of Spain, until the 18th century.

Every year, Sinterklaas makes his 'official introduction, by arriving by boat in the mayor harbours in Belgium and the Netherland. As there is the historic link with Spain, all kids are convinced that the good man therefore is arriving from Spain.

If you have been naughty during the past year, you'll risk to get punished or whipped with a branch, all good children will get presents (how convenient for the parents....)Of course there are no bad children, so everyone receives something from Sinterklaas.
As with many 'catholic' traditions, there are links with much older costumes.
There is for example a parallel with the old Celtic costumes and even with nordic folk religion:

Aside from toys, (nowadays given around Christmas and New Year), Saint Nicolas brings candy and more specificly a typical cookie : speculaas (or speculoos).
A cookie you often receive when ordering a coffee on a Belgian terrace.
The ingredients to make speculaas : flour, pepper, cinnamon, ginger, cloves, cardamom and nutmeg.
For Sinterklaas, the speculaas cookies are made in the shape of Sinterklaas, or as small nut shaped cookies. Then we call them 'kruidnoten' ('litt: herb nuts').


A similar and often confused cookie is the 'pepernoot' (lit: peper nut).
The ingredients are slightly different, and the final cookie is softer than the 'kruidnoot':
They are light brown, round shaped, and made from the same ingredients as taai-taai: flour, sugar, anise, cinnamon, and clove.

So far the introduction to the topic of the day :
The 'sinterklaas - stamps' of the Netherlands, with the fragrance of speculaas.

In Belgium there's a city called Sint-Niklaas, and the good old men is also the patron saint of Amsterdam, the capital city of the Netherlands.
Posted by rainbowstampsandcoins.blogspot.com at 6:09 PM No comments:

Russian Republics and more ... 01 A Siberian Federal District - Touva 2a

A treaty between the Soviet Union and the People's Republic of Mongolia, in 1926, resulted in the independency of Tuva. At least for those two countries as no other country officially recognised Tuva's independency.
No wonder that the first stamp of Tuva, issued in 1926, was in Mongolian language.
(this stamp is NOT in my collection (yet)).
We see on the stamp the buddhist wheel of life, and writings in Mongolian language.
Also the numbers are written in Mongolian.
UPU rules state that the numerals should be written in arabic numerals!

Posted by rainbowstampsandcoins.blogspot.com at 12:34 AM No comments:

The Tuva Republic within the Russian Federation:
Some history...
From the 19th century till 1921, Tanna Tuva was part of north-western Mongolia.
In fact Mongolia itself just declared itself independent from the (People's) Republic of China in the beginning of the 20th century.

In 1933, the coat of arms changed once more, resulting in yet another flag.

As a result of the Second World War, (a couple of days after Nazi Germany entered Russian soil), Tuva became part of the Soviet Union, as the Tuvan Autonomous Oblast.
This annexation was completed in 1944.
Meanwhile... in 1941 and 1943
Russian influence over the region increased from 1944 on...
and in 1961 became the Tuva Autonomous Soviet Socialist Republic...
The state flag changed 10 November 1978 once more, by addition of inscription in Tuvinian language ("Tuva ASSR") as well as in Russian.
With the end of the Soviet Union, in 1992, Tuva became the "Tuvan Republic" and they are a member of the Russian Federation.
... to be continued ...

Posted by rainbowstampsandcoins.blogspot.com at 11:19 PM No comments:

Once more, the 8 Federal Districts of Russia 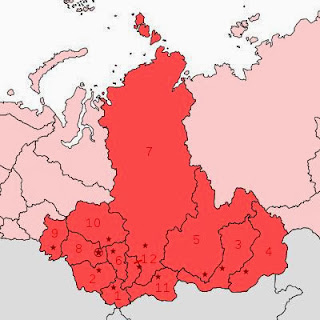 Posted by rainbowstampsandcoins.blogspot.com at 9:42 PM No comments:

Collectors of stamps who might have seen them already, shiny stamps with views on landscapes, pop artists, politicians, ... even cartoons.
Those stamps look a bit suspicious and mention a name of an existing republic or (semi-) autonomous region within the Russian Federation.
Some have names in Cyrillic language, some in English, some even in two languages.

When looking up the names on the world map, the country or region does exists, and is not a tiny island somewhere in front of the Scottish coastline (as seen before), but does that means the stamps are real ?

In this first post, I will give an overview on all (current) entities within the Russian Federation, later on, I will tell more about some of those republics and regions.

In 1993 the current Constitution of Russia was adopted. At that time, 89 federal subjects were participating and recognised. By 2008 the number of federal subject had been decreased to (only) 83, because some areas merged. Each of those entities have a certain degree of independence and equal rights towards regional legislation and constitutions. 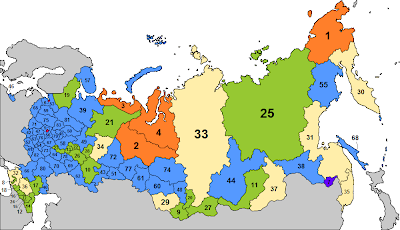 To make it a bit easier, all subjects can be listed under one of the eight districts. 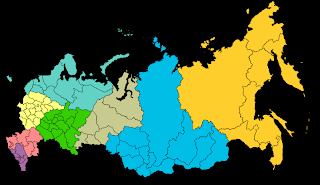 to be continued ...
Posted by rainbowstampsandcoins.blogspot.com at 8:52 PM No comments:

In 2009, the Netherlands celebrated their 400 year old trade relations with Japan.
Until today the Netherlands still have a friendly relationship with the land of the rising sun.
To commemorate this anniversary, the dutch coin issued a special € 5 coin.

The coin got the name 'Japan-five'. It has legal tender like all other € 5 coins, but remained mainly a collector's item.

Now we see the full design. We see a fishermen's knot. As the dutch were (and are) famous sailors and fishermen. A knot is also a good symbol to show the connection between the two countries.

This coin is the 14th € 5 coin that was issued by the Royal Dutch Mint.
Posted by rainbowstampsandcoins.blogspot.com at 6:26 PM No comments:

I have posted previously some perfumed stamps.
Perfume smells good (or at least so it was ment to be), but there is more into a nose then picking up good odors.
No, I'm not talking about sticking your nose into someone else's business, actually the stamps I'm presenting today ARE everyone's business...

This set of stamps is special in 2 ways.
First of all it is printed on recycled paper, and that is of course a blessing for the already threatened forests, especially in Brazil.

Second special fact, is the centre of the 4 stamps.
Each of the 4 auto adhesive stamps shows a nature related image:
we see an anteter, a flower, a leaf and the bark of a three.
One corner of each stamp is 'burning' and the four stamps together gives the impression that the middle part of the block is burned away.
The stamps warn us to prevent wildfires.

60 % of the Amazon rainforest are located in Brazil.
Wildfires (whether or not intentionally caused) are a threat to the deforestation of the largest green lung of the world, and in the end also the entire humanity.

The stamps do not only show 'fire', they also smell like burned items.

Stamps are printed as one big image spread of the 4 stamps.
The perforation is uncommon and absent towards the corners of the stamps.
The set was issued in 1999 by Brazilian postal services.
Posted by rainbowstampsandcoins.blogspot.com at 8:26 PM No comments:

In my set of odd Bangladesh notes, I will show another rather odd note.
It was sent to my from my friend in Bangladesh, so now I can show it to you.
40 on a banknote, is not a common denomination for a circulation note.
But just in case of any doubt, this IS a commemorative note...

40 refers to the 40th anniversary of the independence from Pakistan.

The revolution was lead under the leadership of sheikh Mujibur Rahman, later first president and afterwards also Prime Minister of Bangladesh.

Back side of the note :

Posted by rainbowstampsandcoins.blogspot.com at 6:43 PM No comments:

Another odd note today, not special because of the size, and also not because of the face value (25 is not a special number), but the following commemorative note, is more or less celebrating itself...

Bangladesh' banknotes are printed by the Security Printing Corporation of Bangladesh.
The company was founded in 1988 and celebrated its 25th anniversary in 2013.
No better way to celebrate that anniversary with an own banknote. 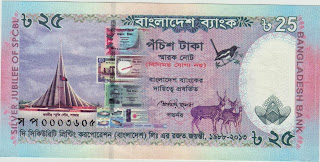 The colours of this banknote is not that common either.
We see different shades of pink, purple, over light blue to white.
I haven't been eating funny mushrooms, but to me this note leaves a very pshychedelic impression.

If we look at the front side of the note, in a more detailed way, we see another odd thing : 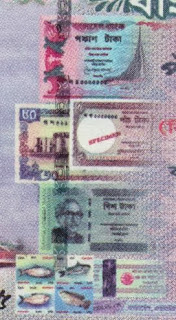 In detail on the front side of the note : the National Martyr's Monument in Savar, Bangladeshi taka banknotes and postage stamps.
This is probably also the first time that 'stamps' are depicted on a banknote.

Two other symbols that can be found, are: three spotted deer, magpie robin (doyel) bird.

On the back side of the note, the Headquarters of the Security Printing Corporation are depicted in the same colours as the front side.
Overall, a weird banknote, that - due to the chosen colours - depict the own countries flag (green and red) in blue and pink.
Special thanks to my friend in Bangladesh who provided me these (and other) notes.

Posted by rainbowstampsandcoins.blogspot.com at 11:12 PM No comments: