Banknotes : Democratic Republic of the Congo - 01

Although it's not always possible, I try to 'blog' something in relation to the news of the last days/weeks.
Of course, if you reach my blog weeks after I posted my entry, it might not always be as accurate as it was on the day I posted it.

Still, I think that posting something about 'Congo' will not be outdated that fastly.

There are in fact 2 Congo's in Afrika. The largest one (also called : Congo-Kinshasa or Zaire).
The smaller one is Congo-Brazzaville (with Brazzaville as capital city)

The one I'm talking about now is the largest country. It's name changed many times during history. 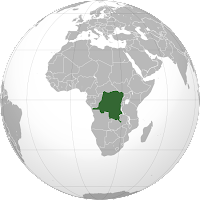 The Democratic Republic of the Congo was formerly, in chronological order, the Congo Free State, Belgian Congo, Congo-Léopoldville, Congo-Kinshasa, and Zaire. These former names are sometimes referred to, as unofficial names, with the exception of Mobutu's discredited Zaire, along with various abbreviations, such as, Congo, Congo-Kinshasa, DR Congo and DRC.

In 1997 all banknotes changed, when Mobutu was forced to flee the country. At that time, the country's name changed into : The Democratic Republic of the Congo.

Before, numerous banknotes with Mobutu's head were produced. Along with huge inflation, a wide variety of notes were printed between the mid 70's and 1997.
When everything changed in 1997, a new set of banknotes was designed and it's worth seeing the notes, and the various details in those newly emitted set.

In this first post, I like to show some notes of lower denomination (all with a lower face value then 1 Franc).
All new notes were introduced on November 1, 1997. They have been replaced by newer notes (other printing dates) but same design.


Some details are very nice to discover.
I put the notes in order according their face value, and you see that the serial numbers are following A B C D and E.


Each note has a diamond with an arrow in, put the notes in order and you'll see the arrow moving against the clock, doing one tour in 5 steps (1, 5, 10, 20 and 50 cents)
On the back, you will see a similar triangle, turning clockwise.
If you hold the banknote against the light, both arrow and triangle make a star.

Finally, some nice details on front and back of the notes. Showing animals and cultural heritage of Congo.


to be continued ...
Posted by rainbowstampsandcoins.blogspot.com at 1:29 AM No comments:

Angels symbolising victory, or victory symbolised by an angel, is quite common.
At least on older stamps. Nowadays angels are not often depicted anymore on stamps.
Due to secularisation of the world, or because we don't think of angels in times of peace?

I found more nice examples of winged figures (angels I suppose) on stamps that refer to war, or victory after a war :


to be continued...
Posted by rainbowstampsandcoins.blogspot.com at 9:45 PM No comments:

In my first post on 'angels', I depicted the angel of Victory, angel Bahram.
Sometimes the greek goddess Nike is used to symbolise 'Victory'.


As I presume, the greek gods and godesses had no wings, so the pictures are most likely a mixture between the greek godess and the angel of victory (Bahram).Angels can take on a variety of different forms. In Ezekiel 1:16-21, Isaiah 6:1-3, and throughout the book of Revelation they are described as taking on not only the appearance of men but many fantastical forms.
A notable example was the angel who took on the appearance of a burning bush. The image of an angel with wings tends to symbolize the spiritual nature of the being. The purpose of the wings being to allow the angel to travel through the ether as well as being a symbol of divine authority.

Angels appear to us with many forms and shapes. Many times the qualities of an Angel are so delicate that they choose female forms or even masculine bodies with female face characteristics. An Angel will appear to us with the form that is best for us.

The angel of victory I found on various stamps however is clearly a female form. Maybe, after a brute (masculine) battle, a sweet period of comfort (female) is needed to make the balance?

In Mexico, an angel of Victory was used to celebrate 100 years of human rights.
Another kind of battle that needed (and still needs) an angel to guide this achievement to victory.

Posted by rainbowstampsandcoins.blogspot.com at 6:40 PM No comments:

What better topic on Christmas day then my collection of "angels".

To understand about the celestial orders/hierarchy it is important to know exactly what an angel is. Briefly it can be described as: a spiritual being that is believed to be much more powerful than a human. In Christian, Muslim, Jewish and other theologies an angel can be one who acts as a messenger, attendant or agent of God.


There are 9 orders of angels, starting with the 'angels' as the 12th (lowest) order, up to the Seraphins as the highest order. According more specialised information, there are even 3 higher levels then the Seraphins, and 3 lower levels (under the angels); although those last 3 (the confessors, the martyrs and the innocents) are not really counted to the 'angels'.
In this last group, the Saints, the Martyrs ... can be found.


The angels of the Twelfth Order of Angels are the messengers that commune with various life forms within the physical worlds.
These include also the Guardian Angels. Angels are generally depicted with wings.
There are almost 400 angels. The I want to start with, is the angel Bahram.
Bahram is the angel of Victory.


A very nice example is a set from the Barbados Islands, who issued a set of stamps to commemorate the end of the first world war.
A set of 11 stamps were issued in 1920, depicting the angel of Victory.
The full set is quite expensive (both mint and postally used). But it's not my purpose here to show all stamps of this set.
This topic about 'angels' is more like a teaser for collectors who ran out of ideas for a thematic collection.

... to be continued
Posted by rainbowstampsandcoins.blogspot.com at 2:40 PM No comments:

We can expect CTO stamps from many countries now, after reading my blog, you'll find CTO in your collection for sure. Most CTO's are easy to recognise, but in this last part of my CTO-contribution, I want to point out some 'dangerous' ones.

Stamps that were cancelled by governmental approval, on huge amounts of stamps, to get rid of an overstock.
This happened for example in Costa Rica.


Costa Rica has a very nice collection of 'classical' stamps from the early years till 1950. Yet, several sets were cancelled by the government and sold under the face value. Maybe a great idea for recycling, or at least to prevent that a lot of stamps were distroyed, but unfortunatly all those stamps found their way to collectors and are now more common than the 'real' cancelled ones. And so I can present them to you, dear followers, so that you can check which stamps are in your collection.
Again here, CTO cancelled stamps have a lower value than postally used stamps.

Luckily, the CTO cancels are easy to recognise again.
Posted by rainbowstampsandcoins.blogspot.com at 8:54 PM No comments:

In this last part of CTO cancels, I will show you 'the dangerous' ones.
Not that they will bite you, but they are dangerous because they don't look 'CTO'.
A catalogue helps to distinguish them, and of course this blog too.

For people who are not familiar with the history of British Malaya, and British North Borneo, I found a great diagram of how those states and islands became united, changed their names, and ended up as Malaysia and Singapore in the end.
I will come back to this diagram and the different states later, but for this post, I only need to refer to "Labuan" and "North Borneo" as you can see in the right hand side of the diagram. Both states are now part of Malaysia.

So far history.
Now to the stamps, and why they are tagged under "the dangerous CTO's".

In 1886 a huge amount of stamps of North Borneo were cancelled.
All new stamps bared the name of "North Borneo" and the new name of the state was now "British North Borneo". All the stamps that were still available got cancelled - officially - with an oval cancel with 9 bars.

Both cancels are easy to distinguish.

to be continued ...
Posted by rainbowstampsandcoins.blogspot.com at 6:42 PM No comments: