To complete the article on the 2000 peso banknote (see previous posts).
I want to show the special box that was made to hold the large note and the certificate.

Again a warm thank you to my pinoy friend Alex, who managed to send me the box without any damage.
Maraming salamat, po. 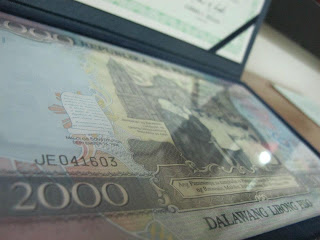 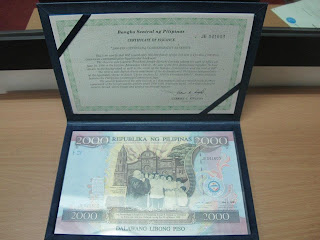 Posted by rainbowstampsandcoins.blogspot.com at 5:54 PM No comments:

I wasn't sure if should post this article under 'static 3D' stamps, or make a complete new category.
In fact the stamp I'm prensenting you today, is not really 3D itself, it's a stereoscopic stamp that needs special tools, (glasses, container) to create the 3D effect.

Maybe some of us played as a kid with a 3D toy called a 'view master'.
It's a kind of binocular where a paper disc can be inserted.
Each image on the card, is printed twice and are shown simultanously when you see through the binocular.
Both images have small differences and as you 'see' only one image, the differences between both pictures create a 3D effect.


This technique was used to create a 3D image of the Titanic stamp on a belgian sheet, issued in 2012.
At the 100th anniversary of the trip of the RMS Titanic.

The sheet can be bought separatly (2 stamps for non-standard mail to the world) @ 7,74 € face value! (prices 2012)
The stamps are 'forever' and facevalue will go up in the coming years.
The additional 3D glasses need to be bought separatly!

To see the 3D effect, the stamps have to be taken out of the sheetlet and inserted to the holder.

This effect is created because the 2 stamps are slightly different from eachother...

If you wish to see the 3D effect AND keep an intact sheet, you need to buy 2 sheets already.
And not to mention the 2 slightly different stamps on the sheet that are needed individually in preprinted stamp albums.

Posted by rainbowstampsandcoins.blogspot.com at 4:35 PM 2 comments:

Thailand, once more.
I can't get enough of the beauty of Thai stamps.
This time, a special edition in the series of 'stamps on cotton'.
Altough, this is not really a stamp made out of, or printed on cotton.
It's thai silk!

In order to add more value to the stamp collection, postage stamp sheets have been made into two types. The first type features a peacock embroidered with brown silk thread on the golden silk material; the second type presents a peacock embossed on golden foil, on a white silk material. This is the first time that this innovation has been used in an issue of postage stamps. This stampset's issue date: 04.Aug.2010.

Posted by rainbowstampsandcoins.blogspot.com at 10:04 PM No comments:

In 2000, the Central bank of the Philippines printed a new set of 'millennium' notes.
These (unissued) notes are more commonly known at the BSP as "Erap" notes because the front features the inauguration of President Joseph "Erap" Estrada at Barasoain Church in Bulacan on 10 June 1998; and the scroll of the 1898 Malolos Constitution.
Printed in 2000, the notes were to circulate in 2001, but President Estrada was ousted from office that year.

As a result of that event, the planned notes were never brought into circulation.
A report from the BSP’s Banknotes and Securities Printing Department (BSPD) said that they have 770 boxes of 1000-piso, 8,312 boxes of 500-piso, 1,233 boxes of 200-piso and 2,957 boxes of 100-piso unissued banknotes.
Even more frightning is that there are also five million pieces of 2,000-piso “Erap” banknotes with a face value of P10 billion !
One option was to issue the 2,000-piso as legal tender circulation notes, the other option was to shred all 99 boxes containing 4.95 million pieces, but retain one box with 50,000 which would be demonetize for “historical, educational, numismatic and other purposes.


The BSP currently sells a larger version of this denomination as a centennial commemorative note (P189).

This note was issued only 300,000 times, together with a special collectors box and a certificate.
And of course, I had to get this note.
Thanks to my wonderful friend Alex in the Philippines, who managed to get one note for me, I can share it now to the world (well at least to those who follow my blog).


Posted by rainbowstampsandcoins.blogspot.com at 2:54 PM No comments:

Thailand is a lovely country.
Not only for visiting and the delicious food, the amazing temples or the friendly population,
no, also for collecting it's one of my favourite countries.

Another, very odd banknote was issued on November 28, 2007
This note is, as my first article on 'odd notes' actually a 'double odd banknote', mabye even a 'triple odd bankote'...

Front side of the note :

1-Baht banknote depicts the portrait of His Majesty King Bhumibol Adulyadej, the reigning monarch (Rama IX), the portrait of Their Majesties the King and the Queen granting an audience to various groups of people who paid tribute to His Majesty on the occasion of his coronation in 1950 at the Sutthaisawan Prasat Hall.

5-Baht banknote depicts the portrait of His Majesty in a royal procession by land, marking his 3rd Cycle Birthday Anniversary in 1963.

10-Baht banknote depicts the portrait of His Majesty granting an audience to various groups of people who paid tribute to His Majesty on the Auspicious Occasion of the 60th Anniversary Celebrations of His Majesty’s Accession to the Throne in 2006 at the Ananda Samakhom Throne Hall.


Back side of the note :

This banknotes was issued in a special leaflet and issued on 15,000,000 copies.
Posted by rainbowstampsandcoins.blogspot.com at 5:40 PM No comments:

After some post on 'odd stamps' I realised that I also have 'odd banknotes'...
Of course there won't be banknotes on cloth, wood, or in 3D ... but still.
In the next posts on 'odd banknotes' I'll show you some of the oddest items in my collection.

How can a banknote be 'odd'.
There 's a chance the material isn't that common.
Normally paper is used, and some countries have polymere banknotes.
The first polymere banknote was 'odd' for sure, but nowadays, it has become rather 'normal'.

So another way to express oddness is in the size, the value, ...

I start with a 'double odd' note :


On the front : The portait of King Rama IX in the uniform of the Supreme Commander of the Armed Forces, wearing a ceremonial robe, the Pudtan Kanchanasinghas Ceremonial Thone.


This banknote was issued on December 8, 1987, at the occasion of the 60th birthday of the King.

I could not find out how many notes were issued.
The catalogue doesn't mention any amount and also that thai national bank doesn't say how many copies were printed.

In addition to the 60 baht face value, a 40 baht surcharge was charged for social works.
The note however is still sold in Thailand, but for a higher price then 100 baht.
Posted by rainbowstampsandcoins.blogspot.com at 4:31 PM No comments: