The Star Wars Saga is like a never ending story.
So far 8 episodes have been made so far (2018).

The story starts with episode 3... It was released in May 1977 already.
A time where space exploration was still more or less 'science fiction'. In the late 70's there was still hope, so 'a new hope' was warmly welcomed.
In May 1980, the empire strikes back, with a second movie, part 4 in the saga.
3 years later, again in May, the Jedi returns with episode 5.
Then the fans have to wait till ... May 1999 when a prequel (episode 1) comes to the theaters.

This 'first' episode was not a phantom menace to all movies that were made in 1999. With over one billion USD in revenue, it whipped out all other movies that year.
In 2002 (guess what ... in May) the clones attacked us again with a fifth movie. This movie was the second of the prequel series.
In ... May 2005, the prequel was completed with a 6th (of sith) revenge.

In 2015, the forces awakened again, and a third trilogy started, this time ... in December.
This movie had over 2 billion USD in revenues!
Two years later,George Lucas found a last Jedi to make the 2nd movie of the sequel-trilogy.
The movie came out in December as well...
Now it's waiting till (December) 2019 (?) for the ninth movie, to complete the trilogy-trilogy.

Many postal services took their part in the huge commercial succes of George Lucas' movies.
For this blog, I limit myself to 'odd' stamps on this topic.
Spain issued a 3D sheet, with 6 'stamps' depicting characters from the movie,
but only one out of the six stamps is actuallly a stamp.
The other 5 look similar but have no country name, nore a value.
The labels depict : A storm trooper - Chewbacca - R2-D2 - Yoda and C-3PO

It's not the best issue Spain made so far, and it's not a superb 3D-sheet either, but I guess it's a must have for all die hard fans ... but that's another movie.

Posted by rainbowstampsandcoins.blogspot.com at 9:26 PM No comments:

At the occasion of the 2010 Fifa World cup, the republic of Slovakia issued a sheet with two identical lenticular stamps.
On the stamp, a football (soccer) player is kicking a ball toward the goal on the opposite site of the field.
In the last 'image' the ball is out of sight, but the player cheers, as if he scored.

The 2010 World Cup was held in South Africa.
Slovakia survived two rounds, but got kicked out before reaching the quarter finals, by the Netherlands. The Netherlands became second in the end.
On the back side of the sheet, all 32 participating countries are mentionned, each in it's own group. 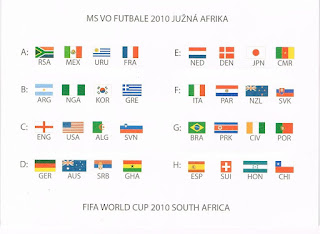 Posted by rainbowstampsandcoins.blogspot.com at 6:25 PM No comments: