I don't know if size really matters, but as far as the Indian banknotes concerns, there is something to say about their sizes.

As there is so much to say about Indian banknotes, I had to mention the languages at the back of the notes.
Let's put them next to eachother: 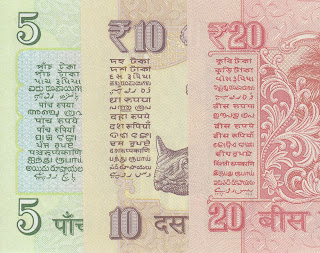 If we look at one note in particular, we see 15 languages that are spoken in India.

For the die hard fans :

Finally, to be complete, the word "rupee" is derived from the Sanskrit word रूप्यकम् (rūpyakam)
and means "silver". This same word in Bengali is : টাকা (taka); and 'taka' is the currency in Bangladesh.
Posted by rainbowstampsandcoins.blogspot.com at 5:00 PM

too much effort pal.There are some errors though.Anyway these languages thing is more a political brainwash rather than improvement.

Hi, you are welcome to improve this article by adding any needed corrections.