We continue our story on Lothandizia, where we find the Kuningana Territory.
Kuninganna happens to mean Queen in Estonian.
This territory issued 8 notes,from 5 till 1000 Fusto. An 'uncommon currency' according the notes.
5 -10 and 25 Fusto. They represent notes 039 to 046 in the set. 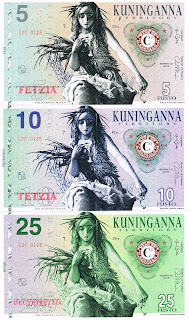 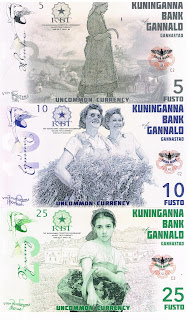 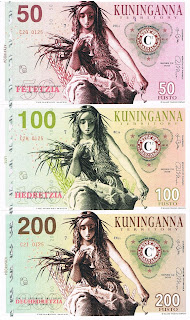 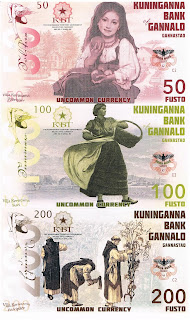 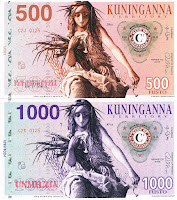 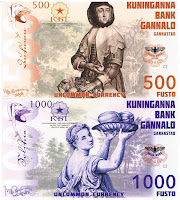 On the front side of each note, we see a girl harvesting.

The left border shows a word, that is repeated on some notes: Talv, Pööripäev, Kevad, Pööripäev, Suvi, Pööripäev, Sügis and once more Pööripäev.
The same words can be found under the denomintation, together with the text : "Vilja Koristama".
"Vilja Koristama" = to harvest the fruit.
The harvesting images reveal that these notes are related to the seasons. And with some knowledge of the Estonian language, we can find out that it represents:  Winter - equinox - Spring - solstice - Summer - equinox - Autumn - solstice

Even without knowledge of the Estonian language, the translation in English, of the above terms, are hidden on the notes.
The script lettertype makes it hard to read, but with some effort, you can read it:
A solstice is a bi-annual astronomical event, around June 21 and December 21, when the Sun's apparent position in the sky reaches its northernmost or southernmost extremes.

An equinox is a bi-annual astronomical event, around 20 March and 23 September. It is the moment at which the center of the visible Sun is directly above the equator.
In the table above, we see the equinoxes and solstices on Earth... Info on the same events on Blissdane Naïve, were not availble on wikipedia.org.

to be continued...
Posted by rainbowstampsandcoins.blogspot.com at 11:19 AM